OK, I’m back! Actually, this has been good for me. I’ve been on the fence about switching to a self-hosted blog for a while and may finally be ready to pull the trigger. Flickr might not change their new policy, despite the outcry, and I don’t want to wait around for it.

Anyhoo, here are the rest of my Denali photos…. 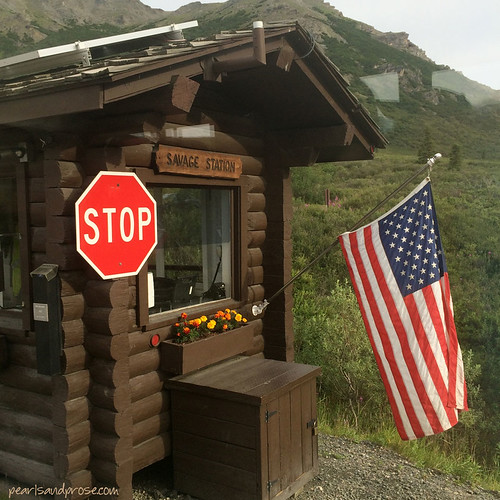 The ranger station for Denali National Park. A very young ranger got on the bus and gave us a brief talk.

“Tundra” refers to areas where the subsoil is permafrost, or permanently frozen soil.
It’s impossible for trees to grow, because they can’t put down deep roots. So, bare and rocky land can only support low growing plants like moss, heath and lichen.

In the summertime, the permafrost thaws just enough to let plants grow and reproduce, but because the ground below this is frozen, the water can’t sink any lower, and it forms lakes, marshes and rivulets.
It’s so strange to me that an area can have temperate climes in the summer and be pretty much frozen the rest of the year.

One flower that grows there is fireweed (Chamerion angustifolium). It gets its name from the fact that it’s one of the first plants to show up after a fire. We saw them all over Alaska. Fireweed blooms from the bottom up, and when the last blossoms drop, the first snowfall will be in six weeks. We were in areas where there was only one blossom left and people were bemoaning it. In July.

This shot reminds me of the Badlands, just a little.

And the two images above remind me of the Na Pali Coast on Kauai.

I shot this through the bus window. See that gravel on the left? That’s right under the wheels. No guardrails.

The gray strip on the left is the road we were traveling. I decided to just enjoy the view and trust the experienced driver.

We stopped for photos near this creek. One guy filled his water bottle with creek water! I guess he didn’t realize the wildlife do all kinds of things in it.

Now, am I the only one who didn’t know that birch trees are tapped for their syrup just like maples? At our lodge in Denali, we ordered salmon with a “citrus and birch infusion.” I imagined fish with bark or sawdust, but this was a really nice restaurant. Let me tell you, it was awesome. Can’t really describe the flavor of birch syrup–the citrus and fish flavors were dominant. Evidently people drink birch juice in Russia and it has healing properties. Ever heard of birch beer? I thought it was just a name.
Here’s an iPhone shot of the salmon:

Thanks for your patience, everyone. Hoping to straighten out the photo sharing challenge soon.

Photography. With a little life thrown in.
View all posts by pearlsandprose →
This entry was posted in photography and tagged Alaska, birch syrup, Denali National Park, fireweed, salmon, tundra. Bookmark the permalink.