Posted on November 6, 2009 by pearlsandprose 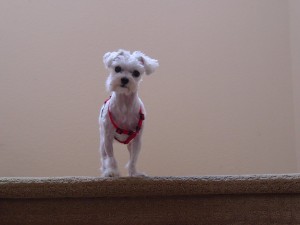 Only one bad thing happened to Rocky in California: he was bitten by a rattlesnake. There was one on our patio and we couldn’t see it in the dark. Instead of retreating, he tried to get it and was bitten on the nose. My son and I rushed him to the emergency vet at 9 o’clock at night and they kept him for observation.

It was terrible. They shaved all his hair except for a patch on his leg where the IV was, and he turned black-and-blue from his nose to his tail. The vet warned me that he could die from: infection, bleeding out (snake venom has anti-coagulant properties) or a reaction from the antivenin.

But he survived–yay!–and after three days I got to bring him home. He really wasn’t himself for at least two weeks, though. Rocky was very lethargic and his eyes looked like Coke bottles.

I was in the midst of a divorce, so this hit me extra-hard. We were supposed to start a new life together and I could not lose him. What a tough little guy he is!

The photo above shows Rocky after he got home….

Until his hair grew back, Rocky stayed warm in my mohair throw from Pottery Barn. I love this picture. 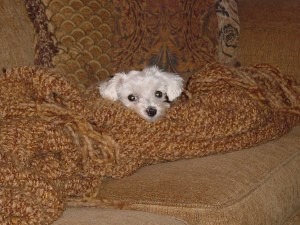 I didn’t plan on making this a blog about my petit chien, but he’s such a big part of my life, it’s pretty hard to exclude him. He was there during my divorce, my recovery from foot surgery and the move from CA to MD. That’s another story….

Photography. With a little life thrown in.
View all posts by pearlsandprose →
This entry was posted in dogs, Maltese and tagged mohair throw, Pottery Barn, rattlesnake bite. Bookmark the permalink.