Posted on January 12, 2015 by pearlsandprose 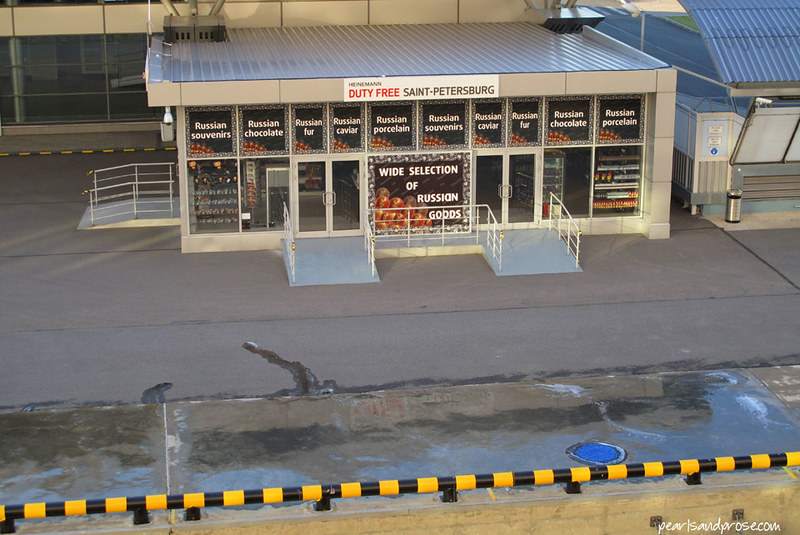 This nondescript building was nearly the ruination of our cruise in the Baltic. I took this photo from the ship when we first docked in St. Petersburg, never dreaming that it would be a negative. No pun intended.

On our last day in St. Petersburg, we had some rubles left and my friend really didn’t want to bring them back. My bank wouldn’t even exchange them for me (“We don’t deal in Russian rubles.” Like they were illegal drugs or something.) Bills would be OK, but we had a lot of coins, which are useless in the States. Oh, a random cruise tip: ship employees don’t care what kind of currency you use for tipping. If only we’d known that sooner.

Anyway, we were browsing in the duty-free shop when a guy who looked like a ship captain dryly asked if I’d care to get on board? I looked at him blankly, then at my friend, and we both shrieked (silently) and looked at our watches. We were 15 minutes past boarding time! We had been fully aware of boarding time, but somehow the minutes just got away from us. We’d heard horror stories about people being left behind and how they had to spend a fortune on a flight to the next port, so were very careful. Of all the places to be left behind, Russia wasn’t the best one.

So we raced to the boarding area where the employees were packing up and felt like minor criminals, ha ha. They actually pulled up the gangplank behind us! We vowed right then and there to not tell anyone, but that didn’t last long. I did wait until I got home to tell my husband, however. Didn’t want him to worry. My friend and I are actually really responsible people. 🙂

If you’re wondering how the employee knew we were in the duty-free shop, we had to go through passport control before boarding the ship, and the tour guides counted passengers on each bus. We also had our IDs scanned whenever we left or boarded the ship. So they knew we’d made it to the port and gone through passport check near the duty-free shop. Thank heaven he took it upon himself to find us. Maybe this happens a lot?

Later on–I think it was a port in Germany–we heard over the loudspeaker that they were waiting for a few passengers to return before the ship left. My friend and I looked at each other and ran to the balcony to look below. There were three or four employees standing on the dock waiting with their ears to phones. Suddenly, one of them called out, “We’ve got a runner.” He wasn’t kidding. A young guy was tearing down the pier like rabid dogs were chasing him. We couldn’t help laughing when a young woman came around the corner next. They were half an hour late, so we felt a little better about our slip-up.

This was the Holland America line, so I don’t know how late arrivals are handled by other cruise companies. Better be on time, just in case. 😉

Photography. With a little life thrown in.
View all posts by pearlsandprose →
This entry was posted in photography and tagged duty-free shop, St. Petersburg port. Bookmark the permalink.

10 Responses to Nearly Abandoned in Russia