The Catherine Palace in St. Petersburg, Part I

Before I get to the photos of Catherine’s Palace, I wanted to show you what we saw approaching the port: 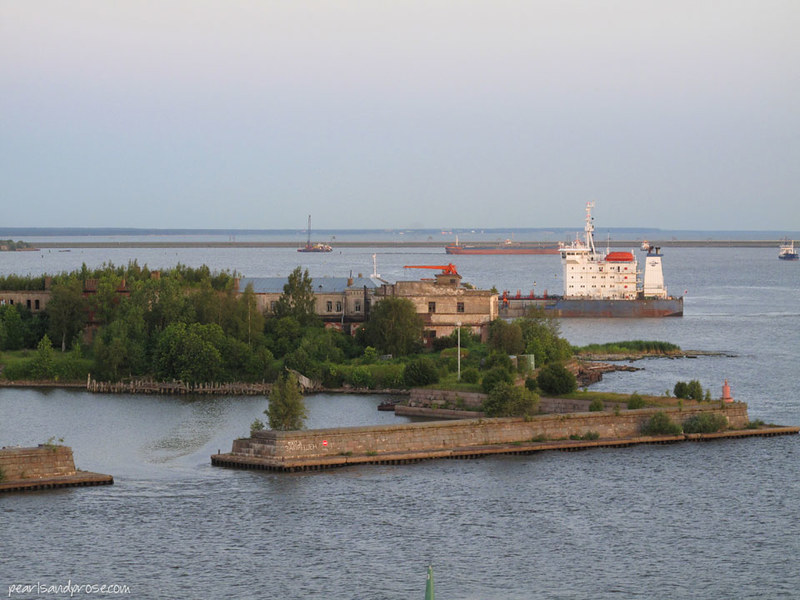 I couldn’t get over how flat the surrounding landscape was. After growing up near mountains and living with them all around San Diego, it looked so different to me. 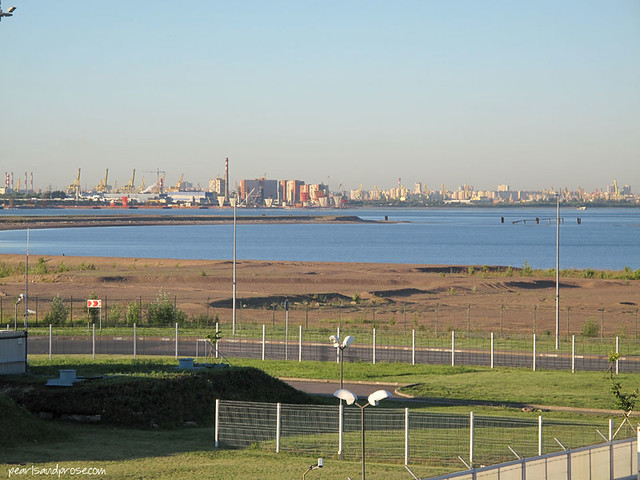 So, the Catherine Palace is named after Catherine I, wife of Peter the Great, who ruled Russia for two years after her husband’s death. But the current design was the idea of their daughter, Empress Elizabeth, who spent her summers at the palace. The chief architect, Bartholomeo Rastrelli, was instructed to completely redesign the building on a scale to rival Versailles. 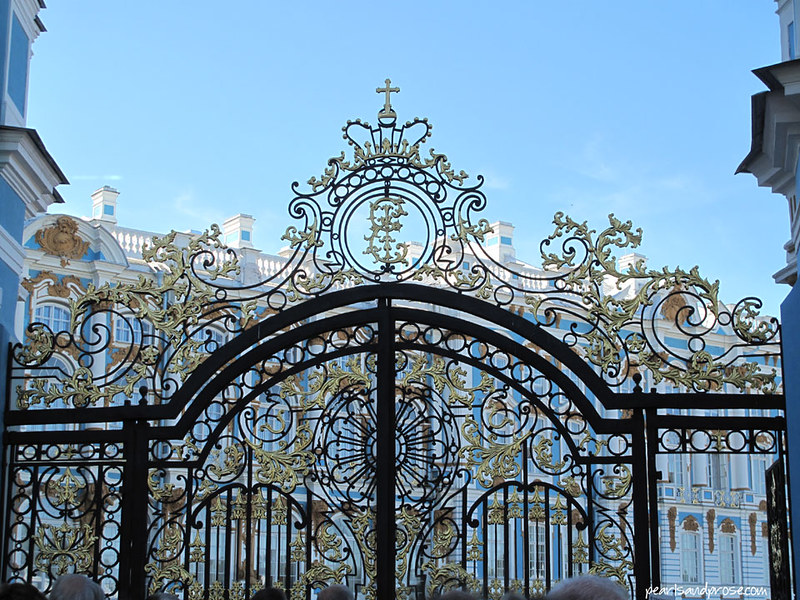 Once we got through the gates, we were rushed and there was no time to take a long shot of the palace. Torture for me. It was either get the photo or be lost and find your own way back. Not a good thing to do in Russia. It was also our first tour, and I didn’t want my friend to have to look all over for me and miss the tour too. Surely we’d get a chance to photograph the front when we left? Nope. We left the back way.

So, I’ve added a photo from Wikipedia showing most of the front in the winter. I probably couldn’t stand the winters there, but it’s so beautiful in the snow. 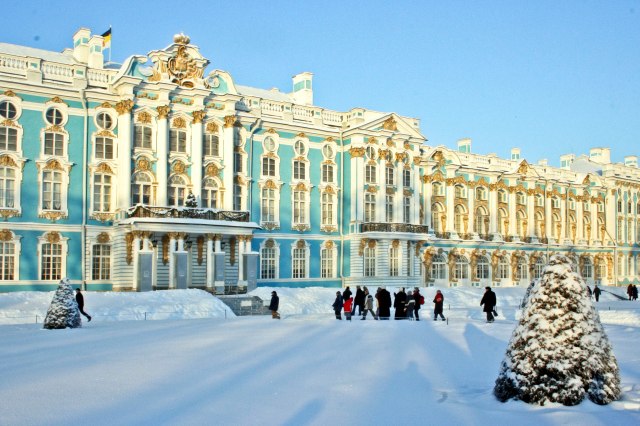 I did manage to catch this while running to keep up: 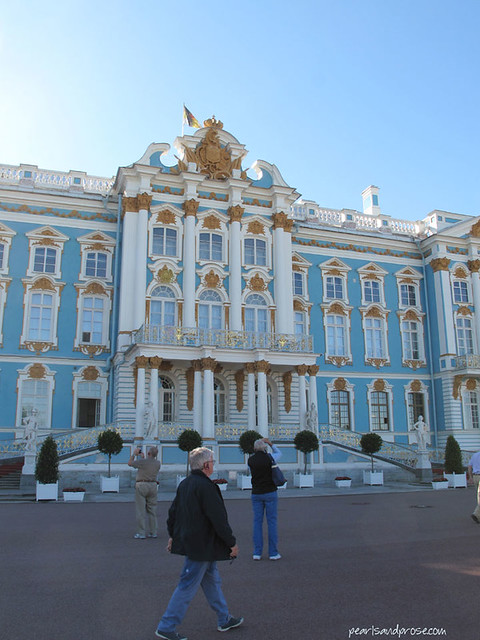 Three other stragglers. I also got this: 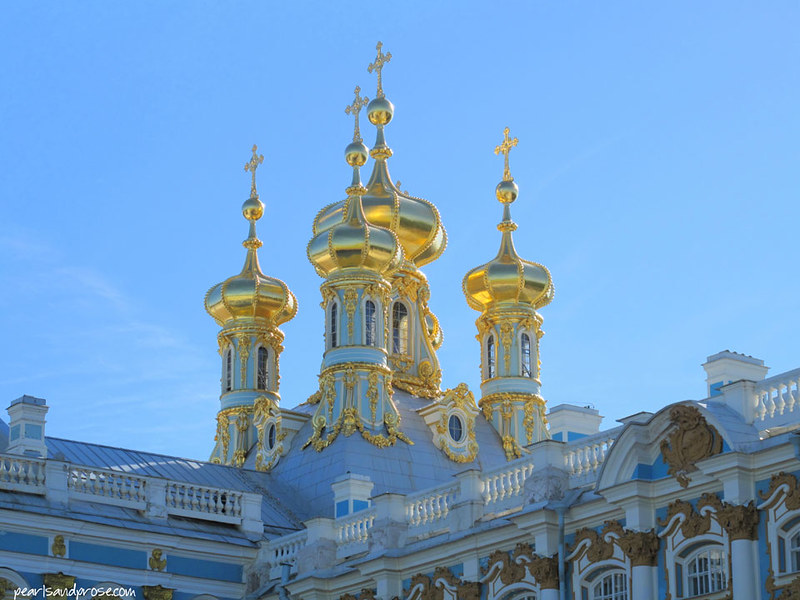 Over 220 pounds of gold was used to decorate the exterior! Catherine was said to be very unhappy about the expense. 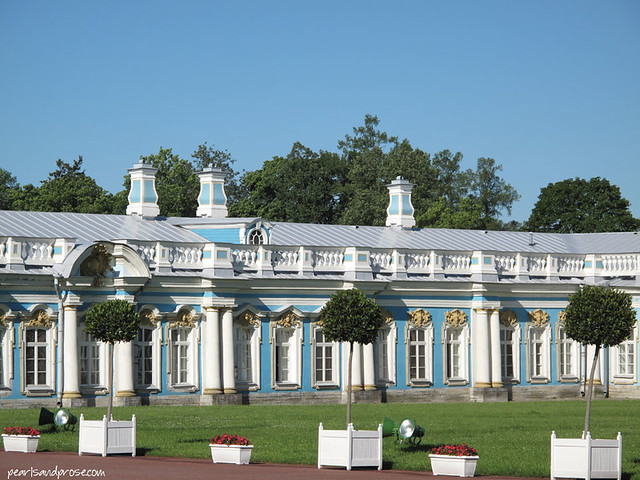 I took this shot of the servants’ quarters from the front steps.

Once inside, we walked up a staircase that was pretty grand too. 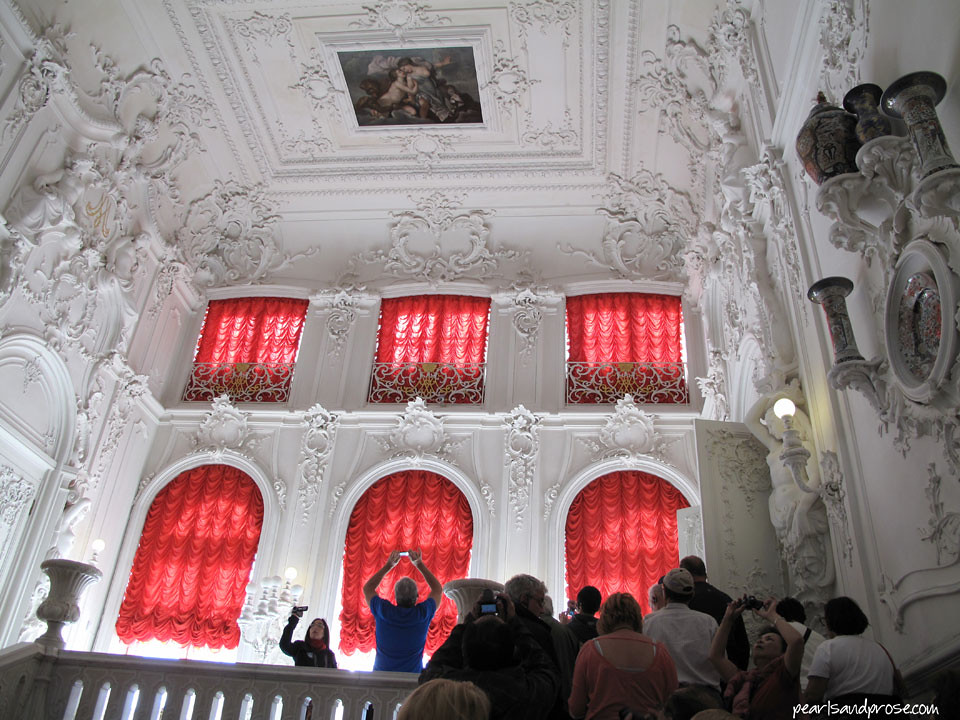 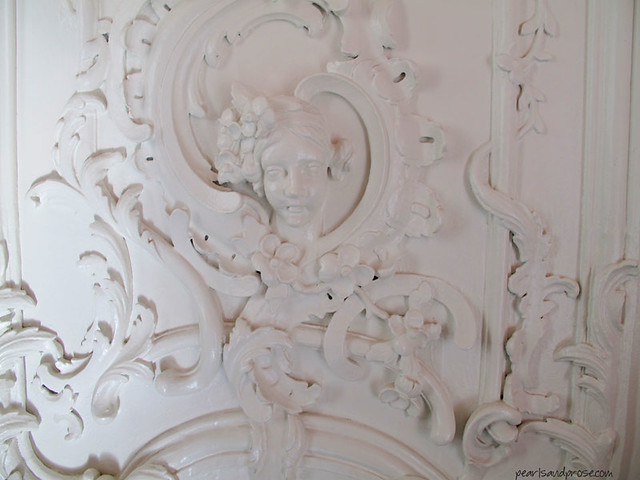 Lovely carvings, but nothing could have prepared us for this: 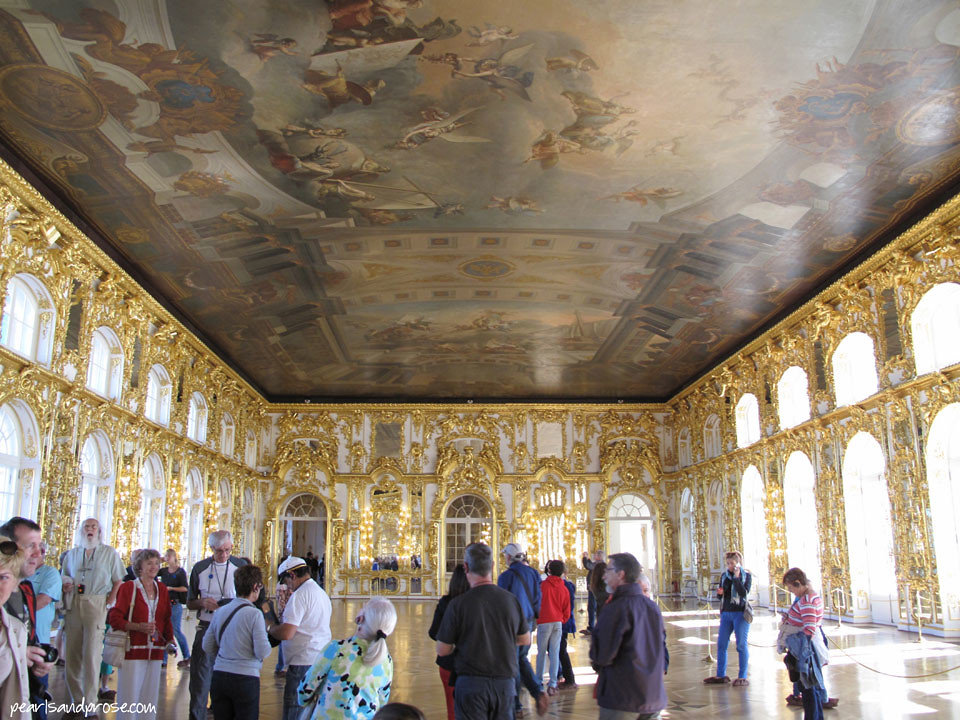 The Great Hall, also known as the Hall of Light. This room measures nearly 10,000 square feet, and takes up the full width of the palace. The entire ceiling is covered by a huge fresco entitled “The Triumph of Russia.” Truly one of the most beautiful rooms I’ve ever seen. Almost hard to take it all in.

Luckily, we were in this room for a while, so I had time to take some photos. 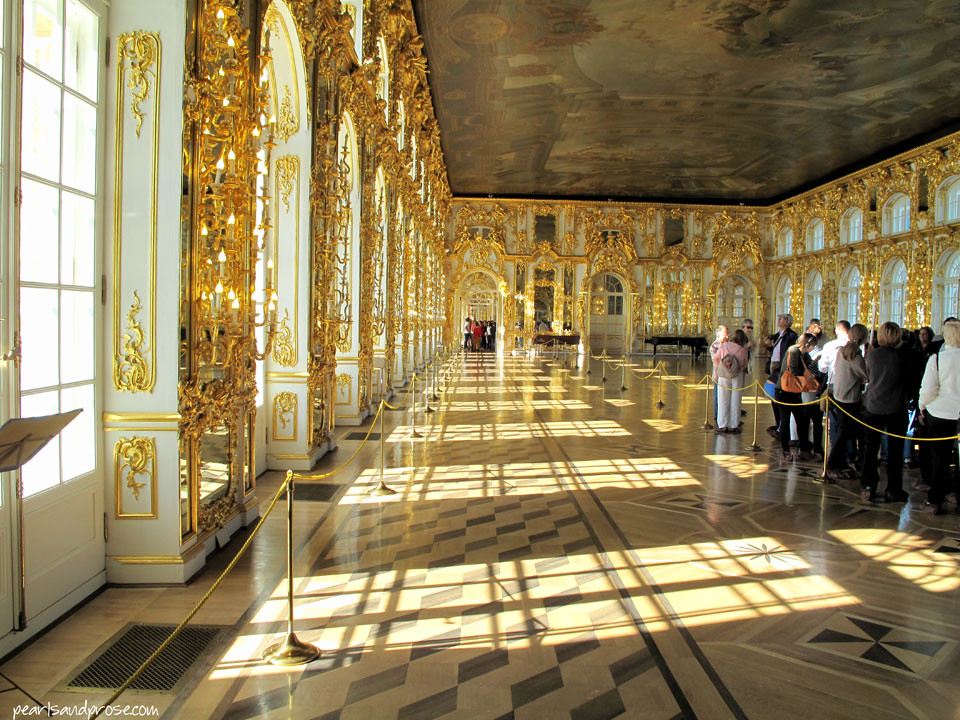 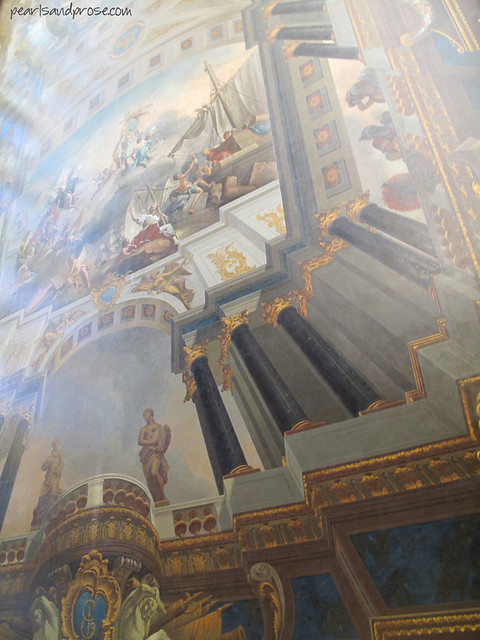 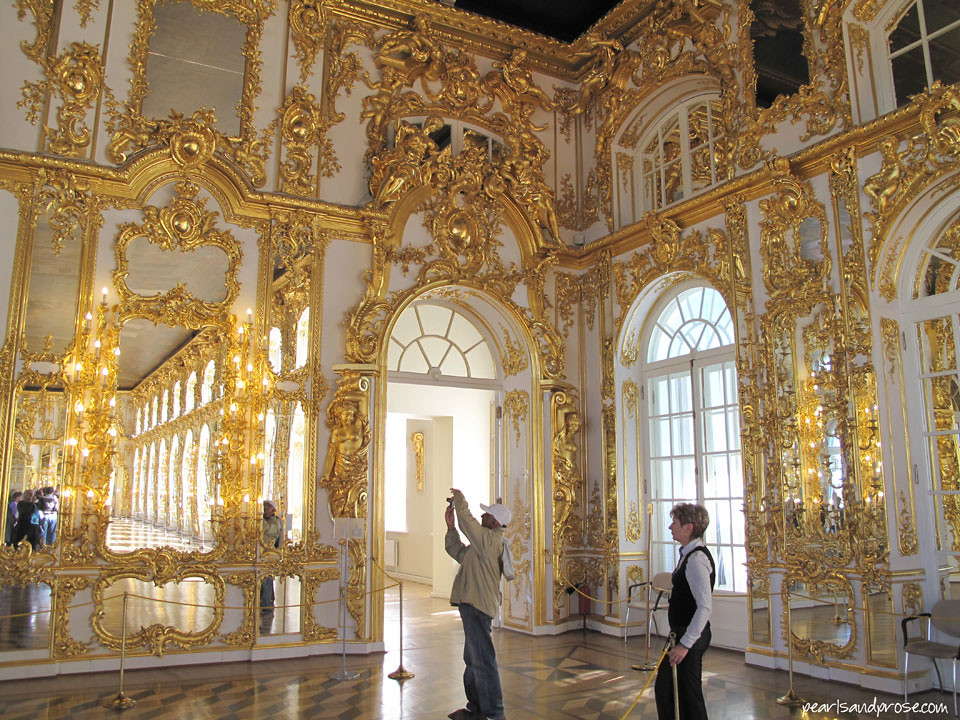 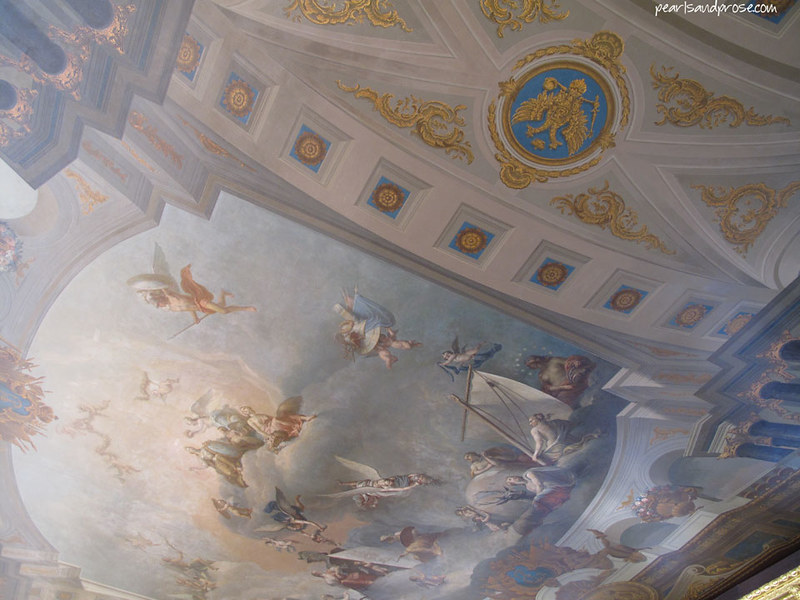 All the sunlight streaming through the windows on both sides made it hard to capture the painting on the ceiling, so I overexposed this to show better detail. 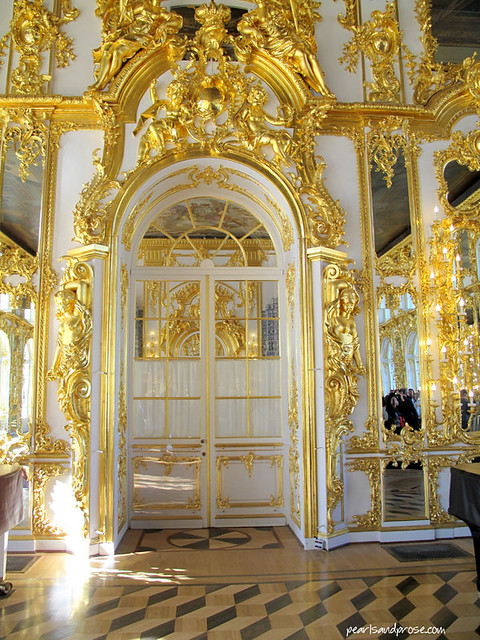 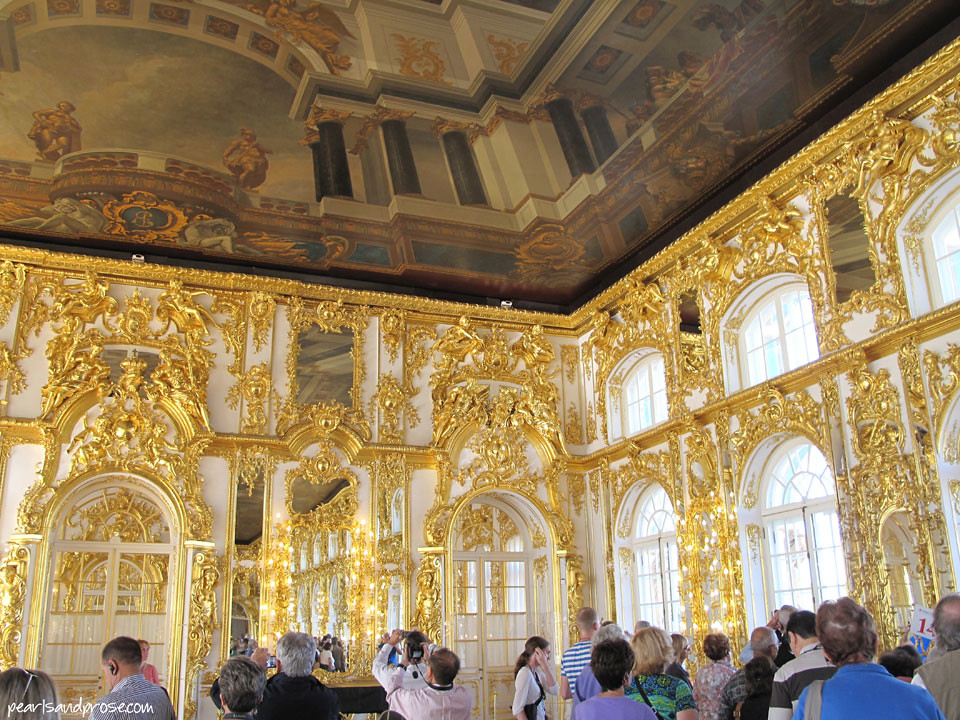 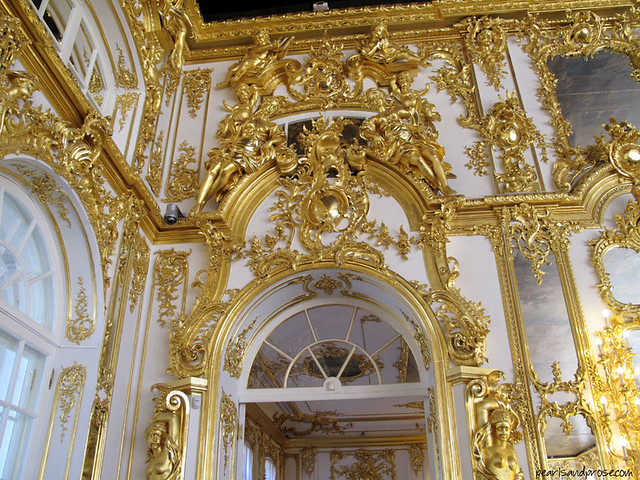 Can you believe the gold and the detail? Every doorway on this floor was the same.

Next were the dining rooms: 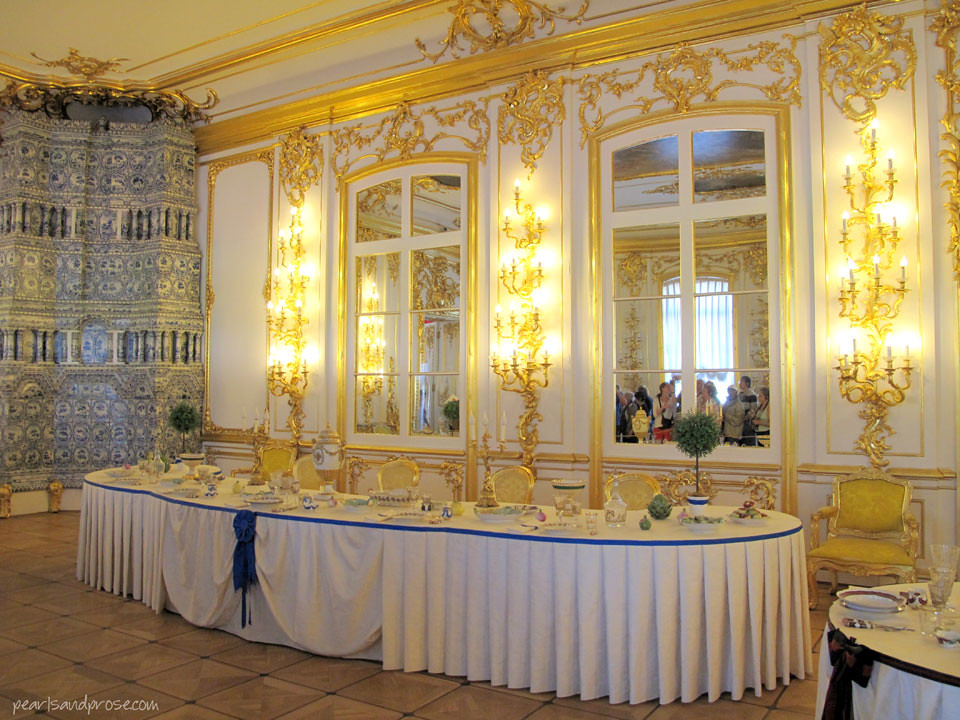 That large blue and white object in the corner? It’s a stove. 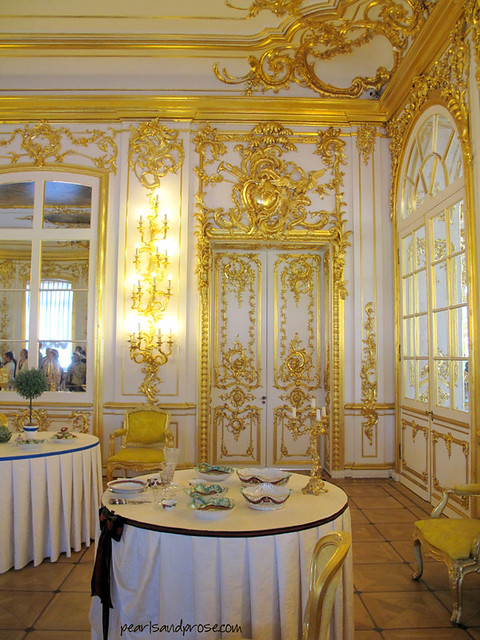 Cannot get over the ornamentation. 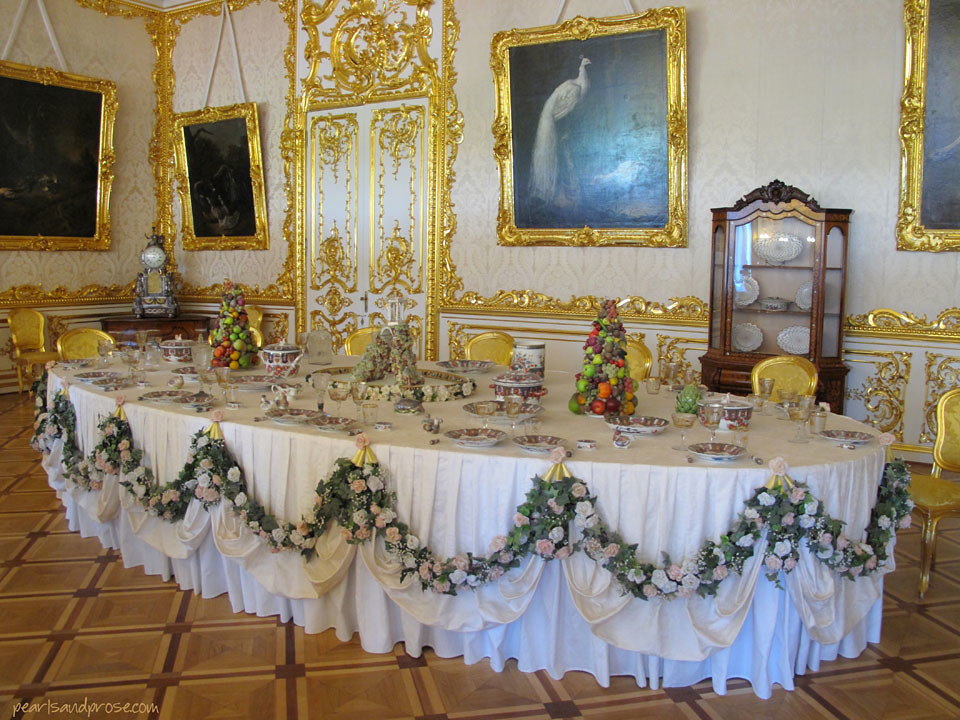 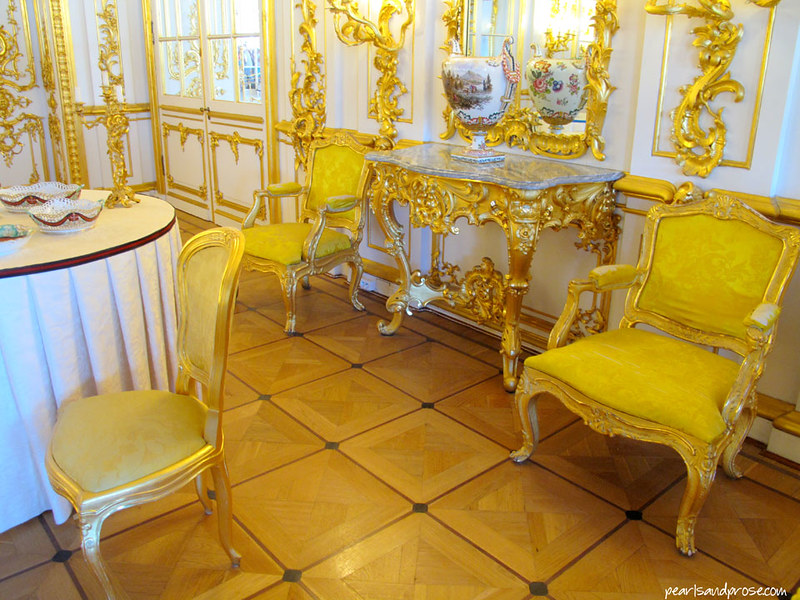 I think you could say Elizabeth was into gold. 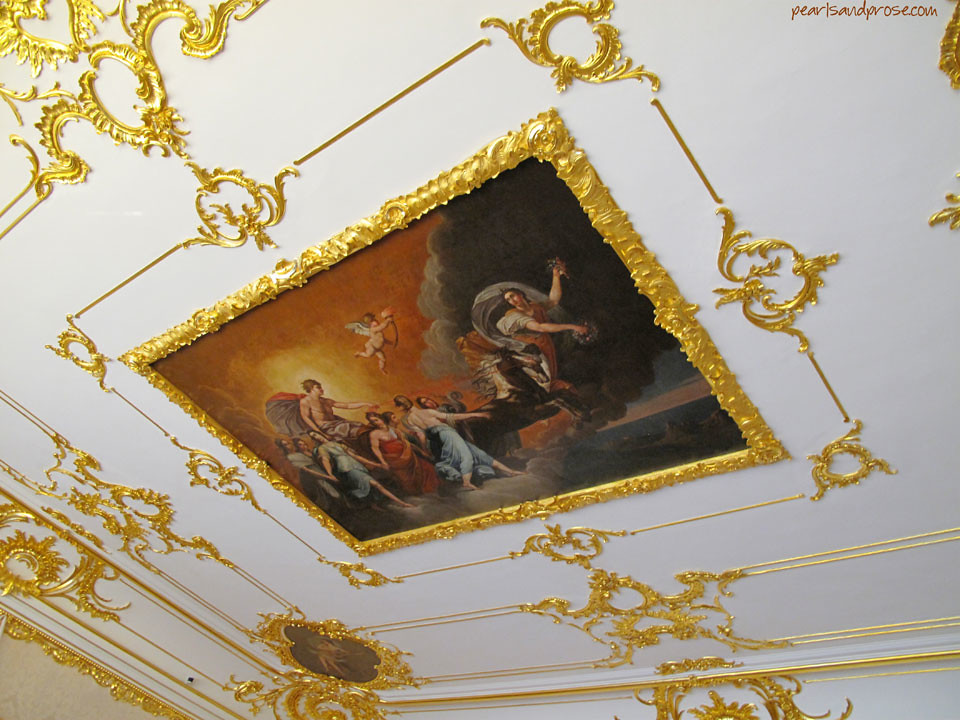 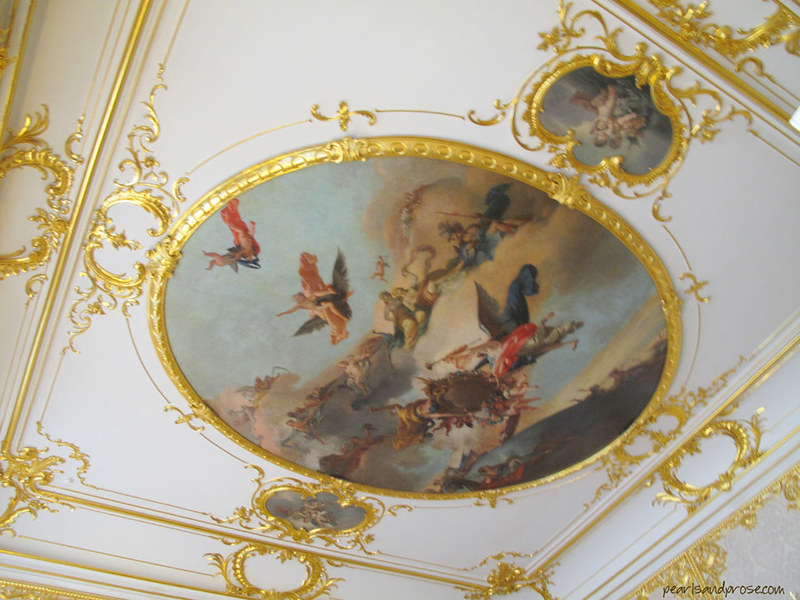 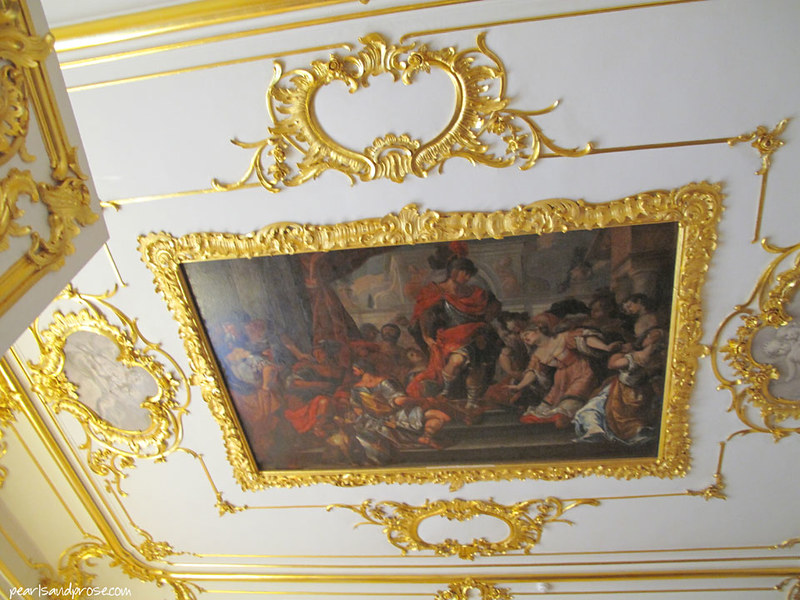 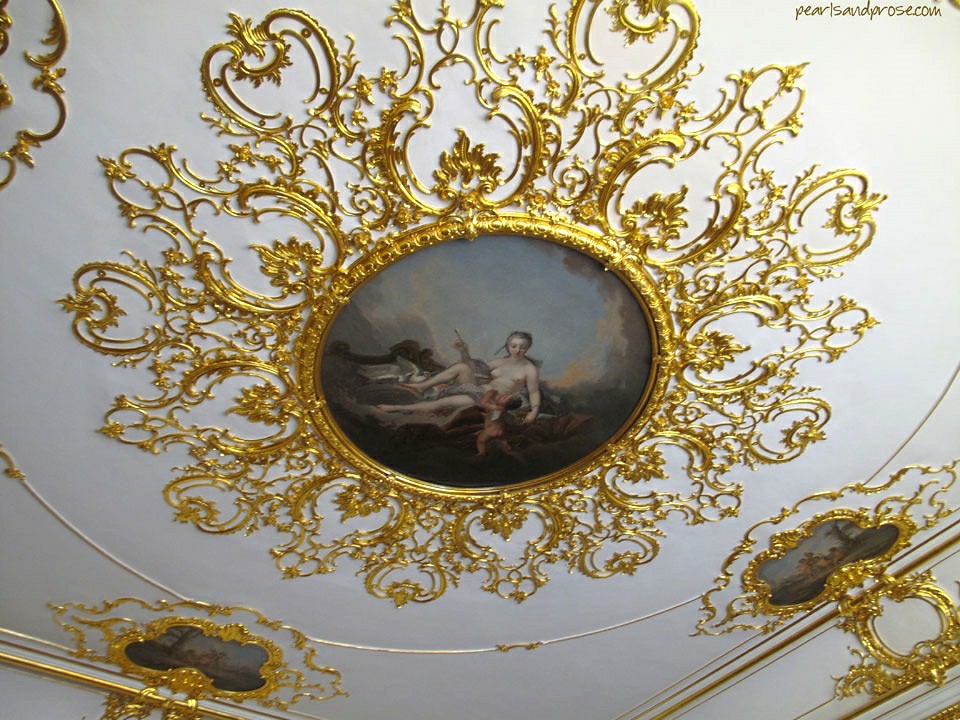 One of the biggest draws is the Amber Room. No photos were allowed, but I managed to take this just before we went in: 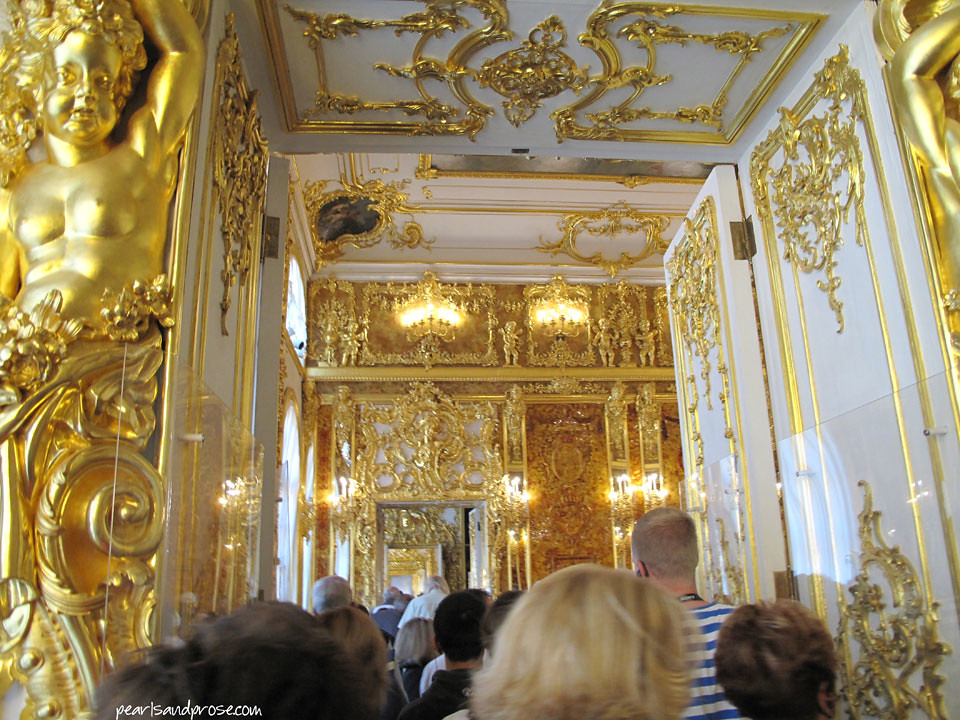 There are mosaic panels made from 100,000 pieces of hand-carved amber all around the room. It is simply staggering to look at.

The BBC has a one-minute video that takes you inside the room here.

Sadly, the Nazis dismantled the entire room and shipped it off to Königsberg Castle in Prussia, where it was never to be seen again. Russian craftsmen spent twenty-four years re-creating this room at the cost of $12 million. In 2003, President Vladimir Putin and Chancellor Gerhard Schroeder opened the room together.

When German forces retreated after the siege of St. Petersburg (Leningrad) they intentionally destroyed the residence, leaving only the hollow shell of the palace behind. Reconstruction is still going on, but it is partially hidden by full-size screens that are painted to look like the palace. I’ll show you photos of that in a future post.

Photography. With a little life thrown in.
View all posts by pearlsandprose →
This entry was posted in photography and tagged Catherine Palace, Great Hall, Russia, St. Petersburg. Bookmark the permalink.

10 Responses to The Catherine Palace in St. Petersburg, Part I