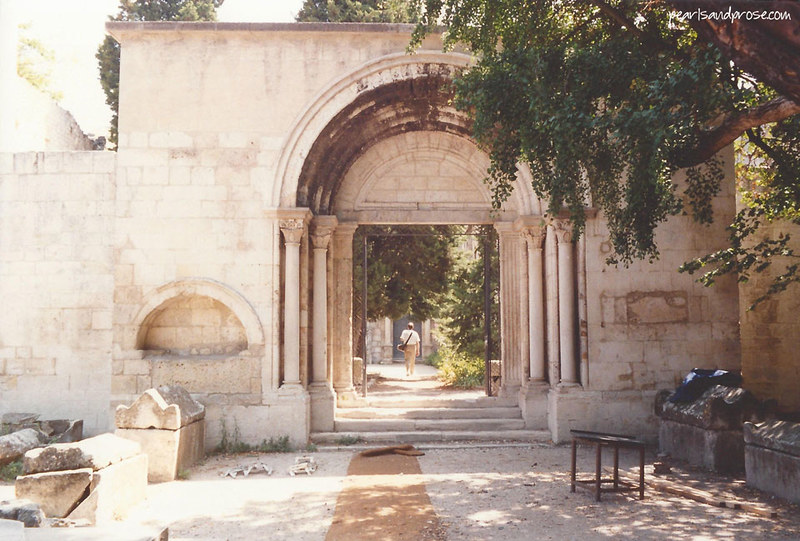 Alyscamps is one of the most famous necropolises of the ancient world (founded in the fourth century or earlier). It was referred to by Dante in The Inferno and was Arles’ main burial ground for nearly 1,500 years. According to Wiki, Vincent van Gogh and Paul Gauguin chose the Alyscamps as the first site for their expeditions where they painted side by side in 1888.

I’m not a huge fan of cemeteries, but I thought this one was amazing. This photo really takes me back to sun-filled days in Provence, one of my favorite places in the world. The person in the photo is our friend E., and yes, those are sarcophagi on either side of the walkway.

Next week I’ll be preparing for my trip to the Baltic, so I won’t be blogging for about three weeks. I’m very excited about seeing Copenhagen, Tallinn, St. Petersburg, Helsinki, Stockholm and Lubeck for the first time. Have already started packing and hope I don’t forget anything. It kind of blew my mind to see that St. Petersburg is eleven hours later than San Diego. That is far. Hoping to share some good photos with you when I get back.

Photography. With a little life thrown in.
View all posts by pearlsandprose →
This entry was posted in photography and tagged Alyscamps, Arles, France, Provence, Roman cemetery, sarcophagi. Bookmark the permalink.