[I’m sorry, I had every intention of publishing this on Monday, but the day got away from me. I think I’m still a little discombobulated by the fire.]

Wednesday, May 14th started out as an ordinary day. I had run over to a market in a neighboring town to get groceries for dinner that night. Great-looking salmon and fresh green beans; raspberries and blackberries for dessert. Just as I hit the check-out line, my husband called and said to come home right away: a policeman with a bullhorn had just driven through the neighborhood telling everyone to evacuate immediately. A fire was burning near our neighborhood. What? No, not possible. A fire that had been burning recently was miles away and had been contained. My husband insisted, so I paid for the food and headed towards home. Now I wish I’d just left everything in the cart.

Leaving the store, I saw blue skies and no trace of smoke. Could my husband have misunderstood? In about ten minutes, I saw this: 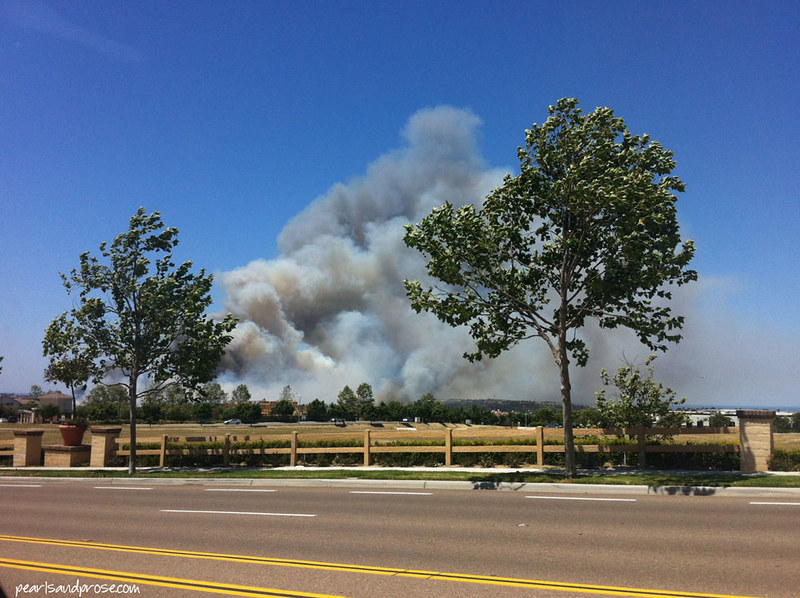 I’ve lived in California long enough to know that white smoke is good. This looked like a brush fire that could be contained fairly easily. I wasn’t panicked, but knew conditions were really bad weather-wise: temps in the high 90s, low humidity and high winds. But the smoke didn’t look like it was close to our house, so I planned to rush home, put the food in the fridge and join my husband and stepdaughter at the local mall, our evacuation point. But as I got closer, the smoke got worse and then I saw flames. I can handle smoke, but flames are another deal. I called one of my closest friends and asked her to pray for us. I abandoned my plan to go home. For a few seconds, I thought of my computer, camera and backup disk drive with four years of photography on it, then realized they were no longer important. As long as my family was safe, I was OK.

I noticed people were driving really, really fast, but carefully. I understood that. They were probably rushing to meet children, spouses, to pick up pets. We weren’t panicking, but we were determined.

My husband has only lived in the area for a year and a half, so I had to tell him how to get to the mall over the phone. Later, I was wondering just what streets I took, but I can’t remember for the life of me. I think the adrenaline was pummping big time by then.

Fortunately, we all made it to the mall and there was a Red Cross center with free bottles of water. People were so nice–one woman gave me dog food and water for Rocky. They allowed pets inside the shopping mall, so we were able to bring Rocky inside where it was cool. He went into travel mode and refused to eat anything but a plain McDonald’s hamburger, just like when we were driving across the country in 2012. It was funny to see people walking dogs in the mall, but kind of normal too.

When it sounded like the fire wasn’t going to be put out quickly, we decided to get a hotel room near the ocean. It was so good to be in air conditioning and with a TV so we could get updates on the fire. I should say “fires,” because there were nine at that point. It was like some kind of sci-fi movie. Sometimes we had to turn the TV off, because we had no idea if our house was gone or not. We felt fairly optimistic, because a policewoman at the mall had a list of streets affected, and ours wasn’t on it.

The next morning, we tried to drive to the house, but all the roads leading to it were blocked. We thought of walking nearly one mile to see it, but it was nearly 100 degrees and I would have had to carry Rocky the whole way. We decided to wait until evening when it was cooler.

Turns out we didn’t have to wait that long. One of our neighbors called and said the roads were open and we could get back in. We sped over there and were filled with relief to see our house still standing, no signs of burn. Then we walked into the backyard and saw this: 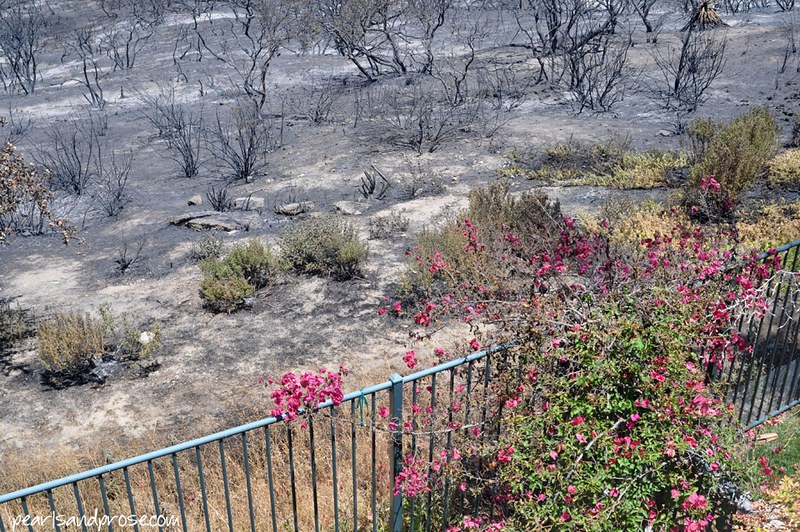 The entire canyon behind our house was burned out. Worse, the burned area was just feet from our fence. I was amazed to see that the bougainvillea survived. I would have thought those woody stems would catch in seconds. 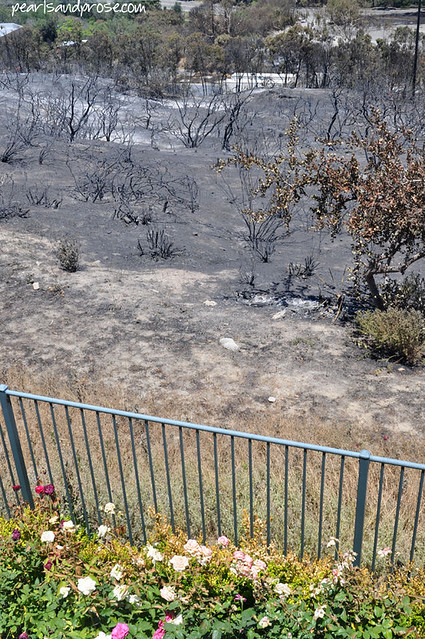 My roses were scorched, but alive. 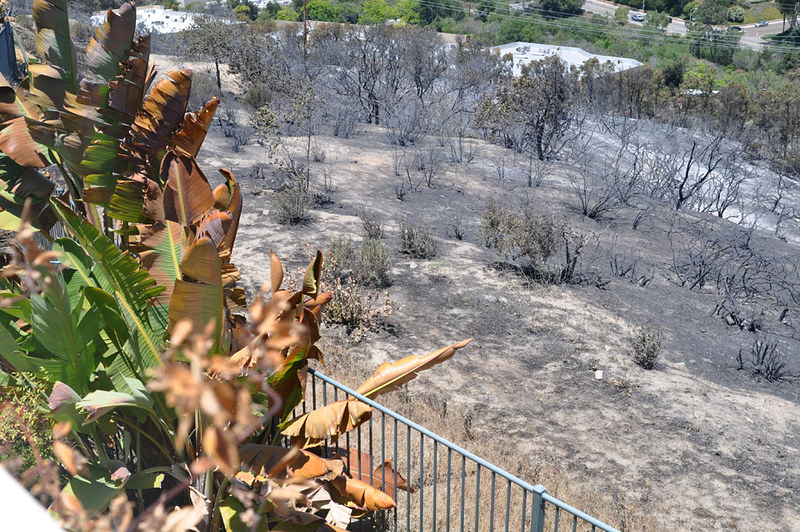 Our lovely Giant bird of paradise was now two colors, but not dead. The underground sprinkler system was OK too. Seeing how close the flames came to our property, I was stunned that any plants survived at all.

We have lovely, fragrant jasmine vines trailing up our balcony. This is what half of it looks like: 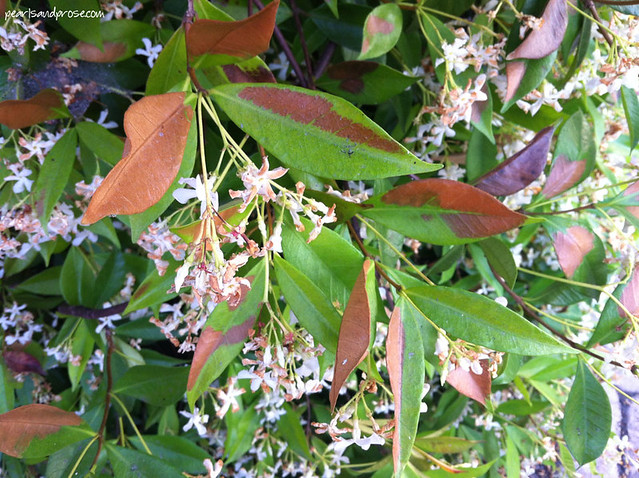 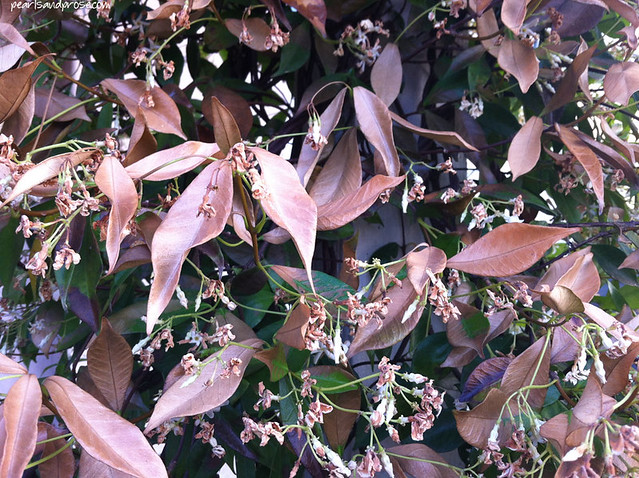 What was really scary? Seeing scorched jasmine on our second-floor balcony, just off the master bedroom: 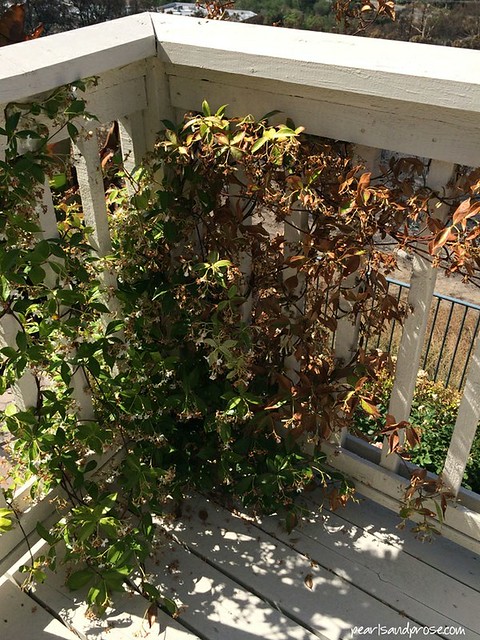 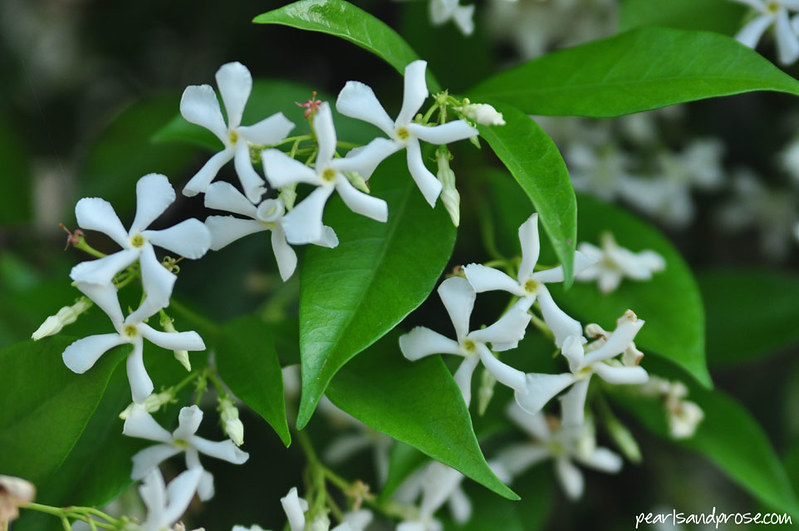 The patio was covered with gray ash, so I started hosing it down. I noticed black spots on the chaise longue cushions, so I hosed them down too. The spots wouldn’t go away, so I got closer and saw that they were burn holes. 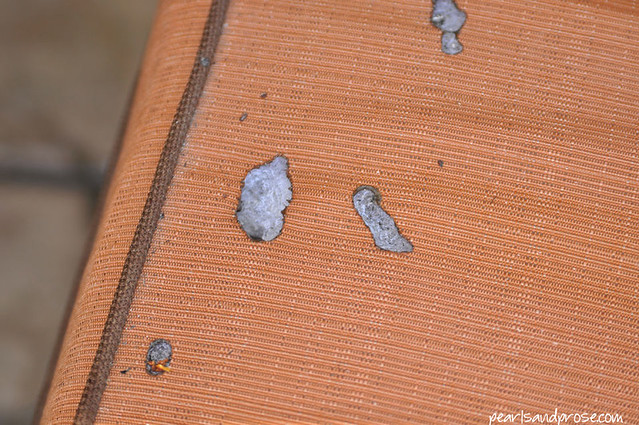 That’s when it really hit me: the fire had come close enough to destroy everything. My eyes filled with tears and I felt completely overwhelmed. How on earth did the fire come so close and not take our house?

Well, the next day learned that one of our neighbors is a firefighter, and he happened to be off that day. He stayed behind with a couple other guys and put out the fires behind our houses. They risked their lives and basically saved the neighborhood. These men are heroes. I’ve heard it a million times: don’t try to save your house; get out and go to a safe place. If these guys had done that, our homes would be gone. They shouldn’t have stayed, but I’m grateful they did. I don’t know how we can ever repay them.

A few homeowners weren’t so fortunate. Four houses were lost and several homeowners are dealing with smoke damage. Luckily, we had closed every window that morning. Even leaving one window open will make that room smell terrible. Our garage smelled like smoke for a couple of days, but it seems OK now.

While watching the fire coverage, I heard a man say, “Yes, my house is gone,” in a flat, matter-of-fact tone. The reporters were amazed, but I understood it. When the situation is so terrible, so out of your control, you realize that worrying or crying won’t fix a thing. Priorities change quickly, as so many have said.

A couple of suspected arsonists have been detained, and there are rumors of a serial arsonist. I hope the person(s) responsible for these fires is put away so we don’t have to live in fear every time the temperature soars and the winds pick up. I still love living here, but know that fires are a given.

I also know that we were extremely lucky and prayers were answered. And yes, I am counting my blessings.

Photography. With a little life thrown in.
View all posts by pearlsandprose →
This entry was posted in photography and tagged burned canyon, San Diego fires, scorched plants. Bookmark the permalink.

20 Responses to Escaping a Firestorm