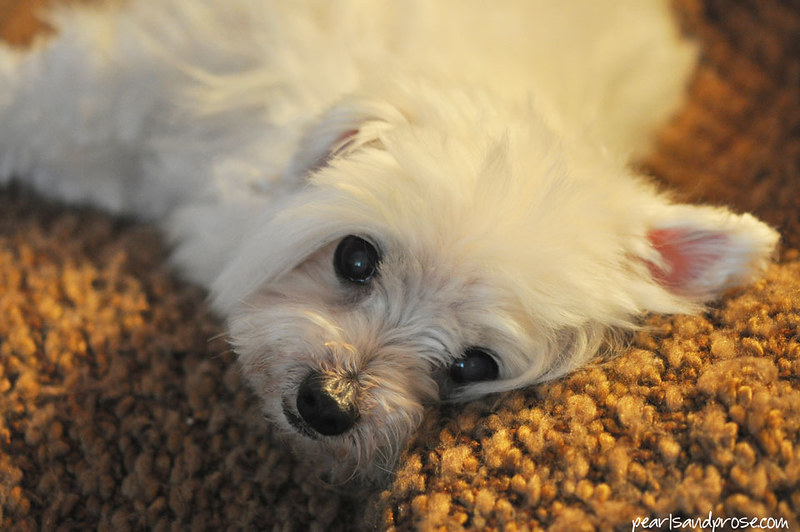 Those of you who’ve followed the blog for a while know I have a Maltese named Rocky. I haven’t written about him in a while because he’s not doing well. I know Rocky is nearly sixteen years old, but it’s unbelievable how much he’s declined in just one year. He is almost completely blind, and last month he started going deaf. I used to be able to call to Rocky, now I have to go over and get him so he knows where I am. It’s kind of . . . heartbreaking. He often forgets that I’m nearby, so he’ll get up and go looking all over the house if I don’t catch him soon enough.

You’d think that it would be really tough for a blind dog to get around, but Rocky doesn’t have any trouble going upstairs, or finding his food and water, or finding his bed(s). Sometimes I have to alert him to a curb, but he’s still pretty good at finding them. The hardest part for me is that he sleeps all day long. He only wakes when I tell him it’s time to go out or I’m going upstairs. The photo above is from three years ago, before he got cataracts. I didn’t have the heart to post a recent photo because he’s not looking himself.

I honestly didn’t know if Rocky would be alive when we got back from the cruise, and am so grateful that he was. I wouldn’t want him to go alone. Now I realize that he just isn’t going to wake up one day. I’ve had time to get used to the idea, but I know it’s going to be awful when the time comes.

Sorry to be such a downer, but I thought it would be wrong to just announce that Rocky was gone with no warning whatsoever. You dog lovers know exactly what I’m going through. I will just enjoy every day I have left with him. It’s been a wonderful twelve years.

Photography. With a little life thrown in.
View all posts by pearlsandprose →
This entry was posted in photography and tagged Maltese dog on throw. Bookmark the permalink.