I meant to do this post a while ago, but life got busier than usual. We visited two more places on our way out of Taos, New Mexico . . . . 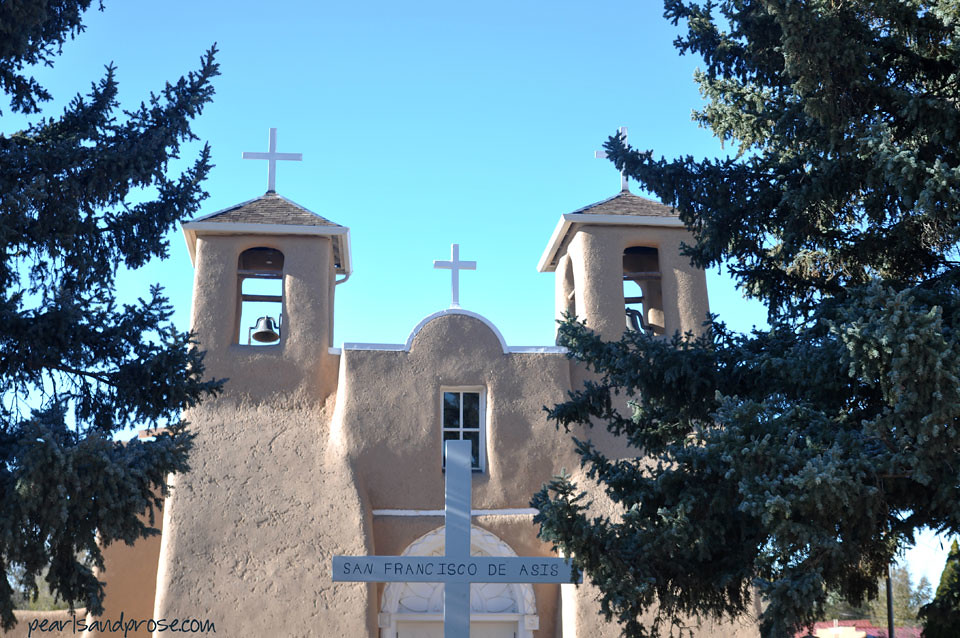 A National Historic Landmark, the Spanish Colonial San Francisco de Assisi Mission Church is a beautifully-preserved adobe building located just south of the town of Taos. The Franciscans supervised the construction of the historic church between 1772 and 1816. 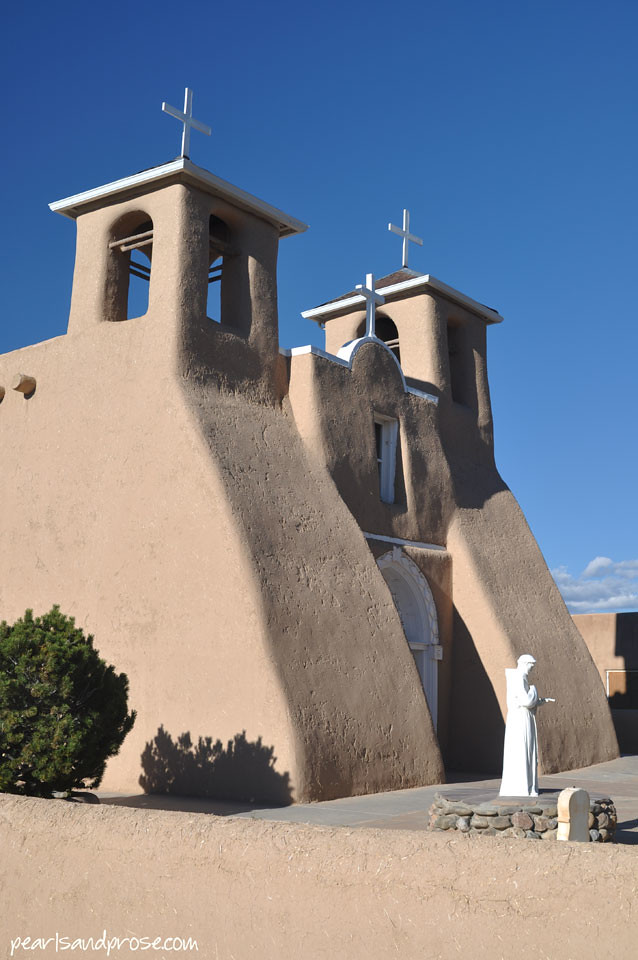 The architecture of the church is a mixture of native and Spanish styles. The buttresses in front of each bell tower support the front. 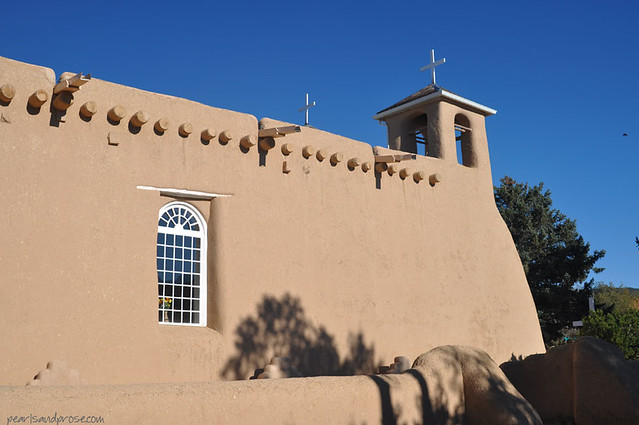 Side view. The church was closed, so we couldn’t go inside. I’m guessing I wouldn’t have been able to take pictures of the interior anyway.

Ansel Adams photographed the church for his Taos Pueblo art book and Georgia O’Keeffe painted a series of perspectives of the church. O’Keeffe once described it as “one of the most beautiful buildings left in the United States by the early Spaniards.” 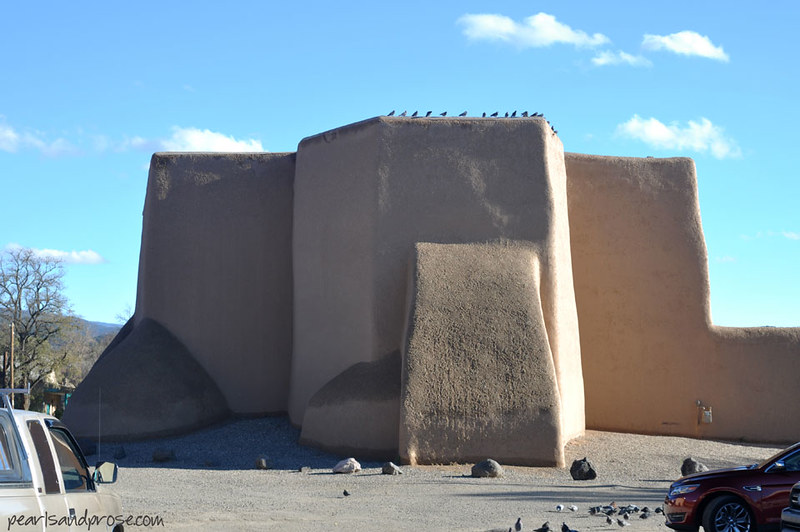 Four “beehive” shaped buttresses support the back of the church. I’ve never seen anything like it before. 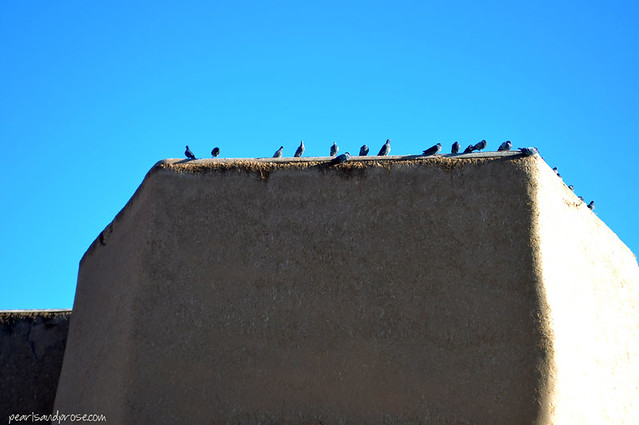 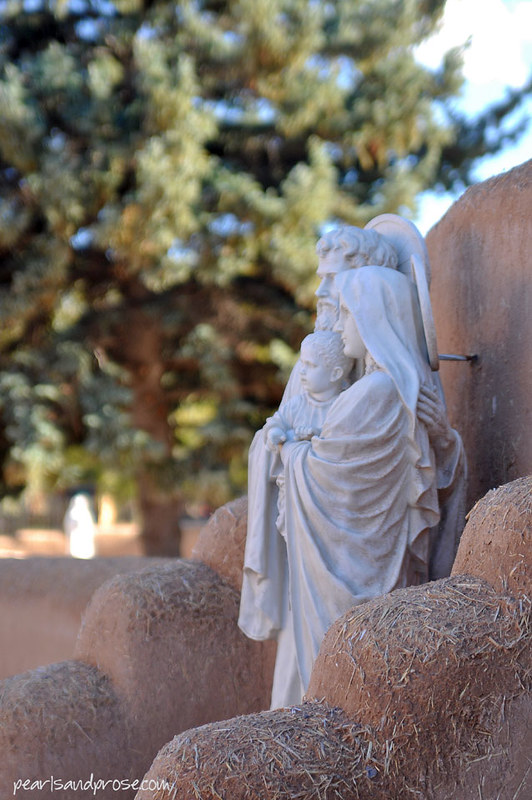 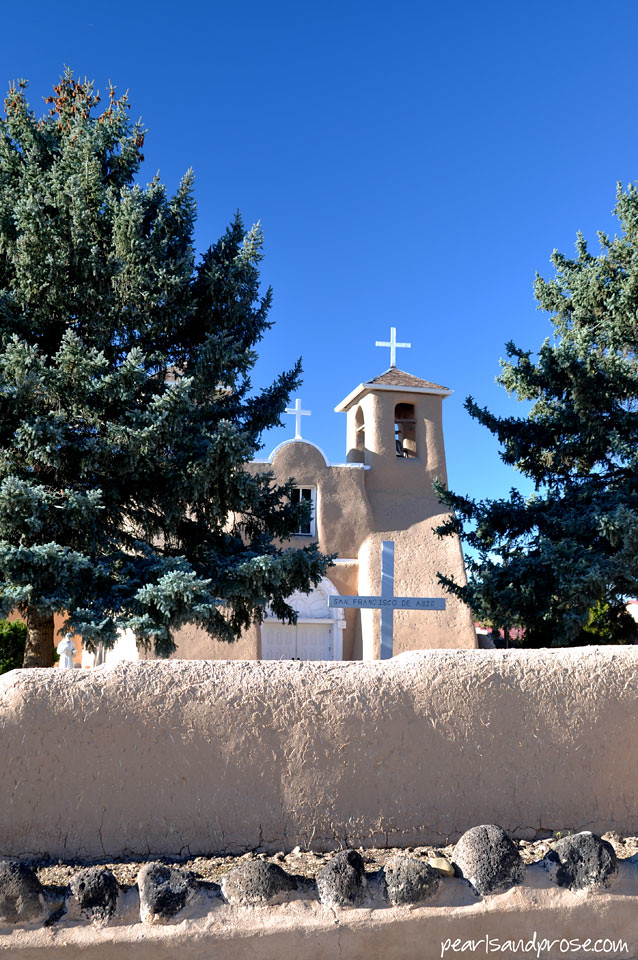 A thick adobe wall surrounds the church, cemetery, and forecourt. According to the web site, residents, parish members and visitors gather for two weeks each June to re-mud the exterior of the church with a mixture of mud and straw. (Visible in the photo of the statues above.)

There were galleries nearby, but we were there on a Sunday, so not many were open. 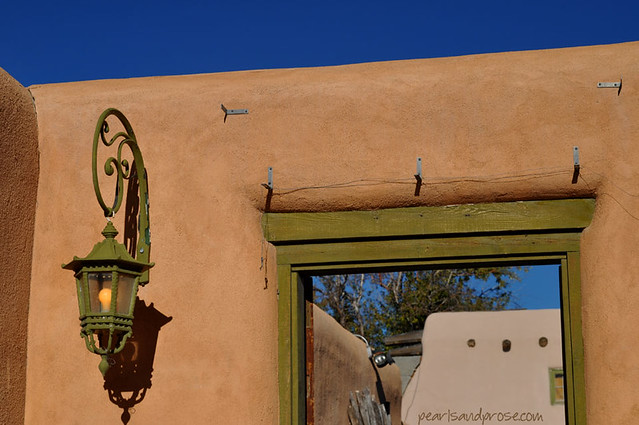 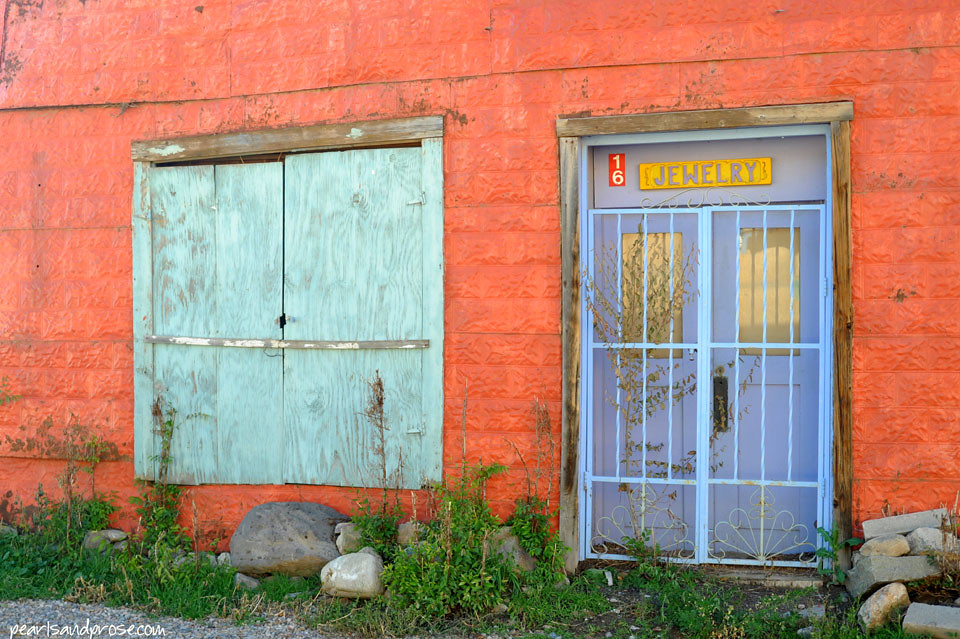 I loved the colors in this place, but it looked closed for good. The sapling growing in the doorway was a clue. 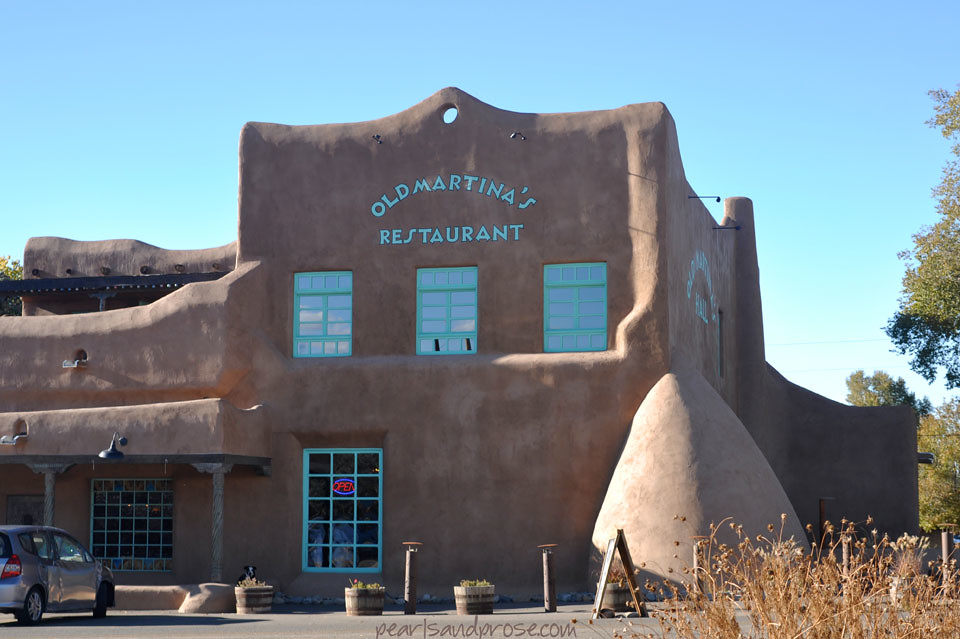 Across the street, a great restaurant/bar called Old Martina’s. We got there around seven, but the place was nearly deserted. A shame, because the food was really good.
I liked the rustic but tasteful decor a lot: 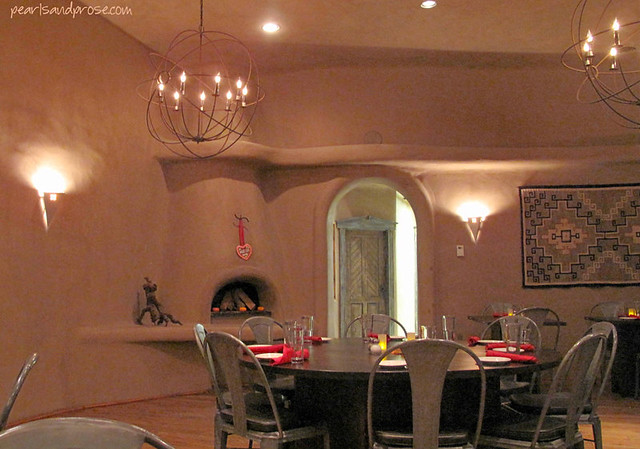 The light fixtures were really cool. I apologize for the grainy photos, but the lighting was pretty dim and I didn’t use flash or tripod, obviously. I’ve lightened these photos considerably. 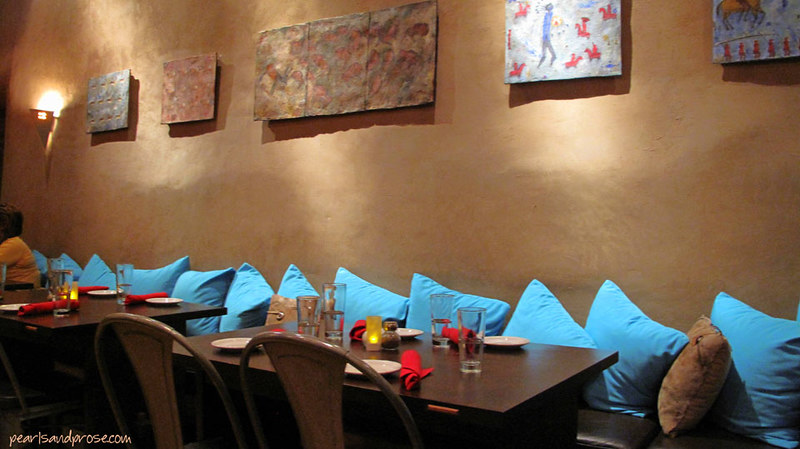 New Mexico does turquoise so well. 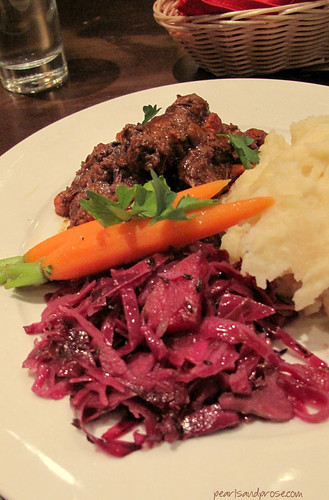 I was really surprised to see sauerbraten on the menu, but decided to give it a try. Delicious. The pastries for dessert looked incredible, but we were stuffed. 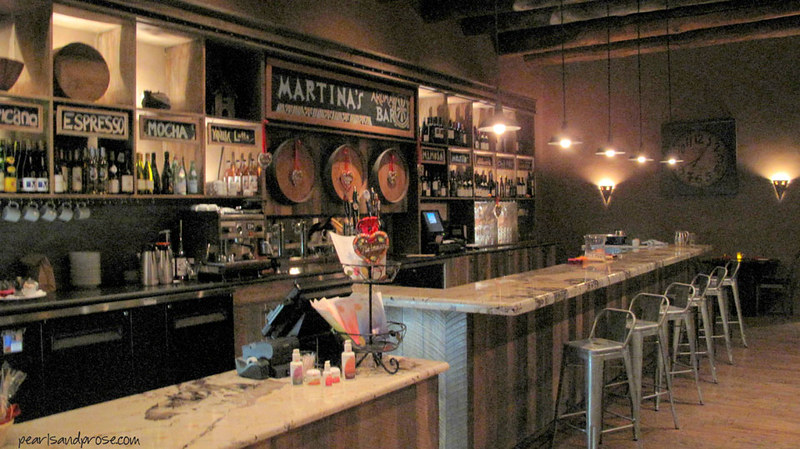 The coffee and bar area. Really hope this place stays in business.