Posted on June 1, 2015 by pearlsandprose

Krak des Chevaliers is a Crusader castle in Syria, first inhabited in the 11th century by a settlement of Kurds. It was first known as Hisn al Akrad, or “Castle of the Kurds.” In 1142 it was given by Raymond II, Count of Tripoli, to the Knights Hospitaller. It remained in their possession until it fell in 1271, then became known as Crac de l’Ospital. The name Krak des Chevaliers was coined in the 19th century. 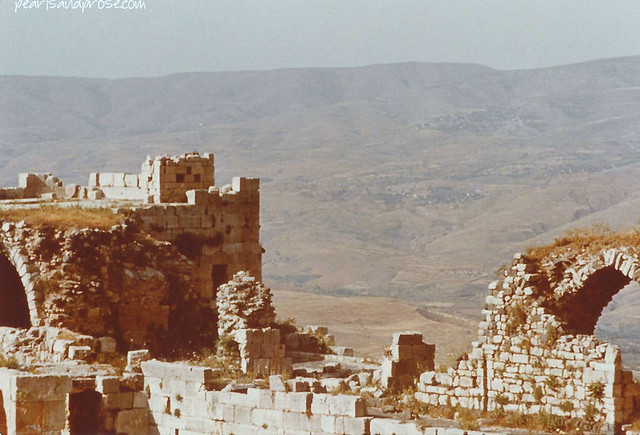 This is the only photo I have of the place. The castle was built with limestone.

The reason I took only one photo was because we had an unsettling situation when we arrived. The castle was in the middle of nowhere and no other vehicles were in the parking lot. There was one old man sitting in the doorway, so we figured it was open. While getting our gear together, I looked out the windshield and saw that a crowd of young men had formed. They looked to be from 15-20 years old. They were just standing there, staring. Intently, without blinking. Being a friendly guy, my boyfriend waved and smiled. They didn’t move.
I’m sure we must have looked pretty strange to them, two tall blond Americans sitting in a German Post Office van. But they continued to stare for seconds, then minutes. I’ve never experienced anything like it. Somewhat unnerving.

We’d driven a long way and really wanted to see the castle, so took a chance and got out of the van. Again, no one moved. We went inside and were given a brief tour by the old man. My boyfriend didn’t feel comfortable having the camera out, so I took my one photo really fast and he put the camera in his backpack.

When we came back to the van, the guys were standing in the same spot, still staring. We had planned to camp overnight there (it was in our camping guide as a safe place to stay) but the hairs were standing up on the back of my neck and my boyfriend agreed it was time to go.

We had more than a few close moments on that trip through Europe and the Middle East, but someone was looking out for us. The only bad thing that happened was when our van ended up in a ditch in Greece, but a truck driver happened by and pulled us out.

While researching the castle for this post, I was dismayed to learn that the Krak was shelled in August 2012 by the Syrian Arab Army. It was damaged again in July 2013 by an airstrike during the Siege of Homs. So sad.

Here is the castle before:

Lawrence of Arabia once remarked that Krak des Chevaliers was “perhaps the best preserved and most wholly admirable castle in the world, [a castle which] forms a fitting commentary on any account of the Crusading buildings of Syria.”

Photography. With a little life thrown in.
View all posts by pearlsandprose →
This entry was posted in photography and tagged Krak des Chevaliers. Bookmark the permalink.