The Wonder of St. Isaac’s

Posted on September 15, 2014 by pearlsandprose 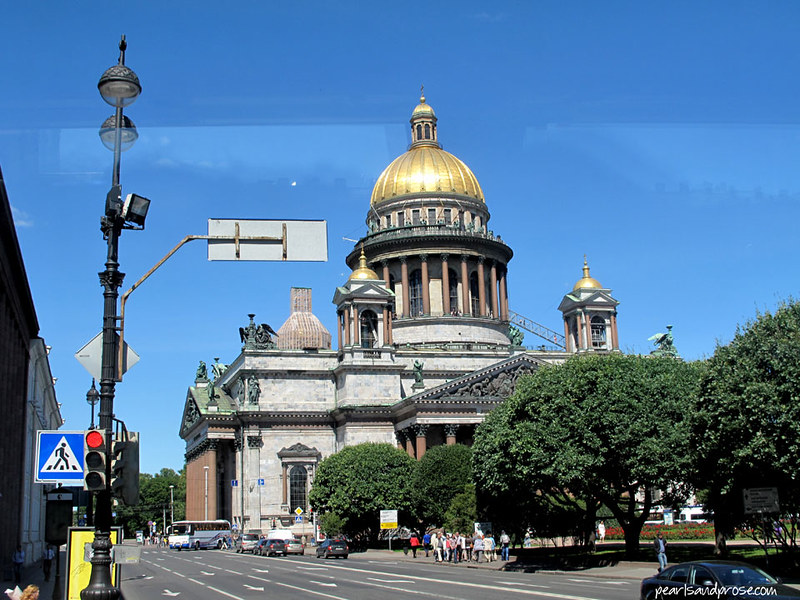 St. Isaac’s Cathedral is the largest Russian Orthodox cathedral in St. Petersburg. It is also the fourth largest cathedral in the world, designed to accommodate 14,000 standing worshippers.
[Sorry about the reflection–this was the only chance to get a long shot and it was from a vehicle.] 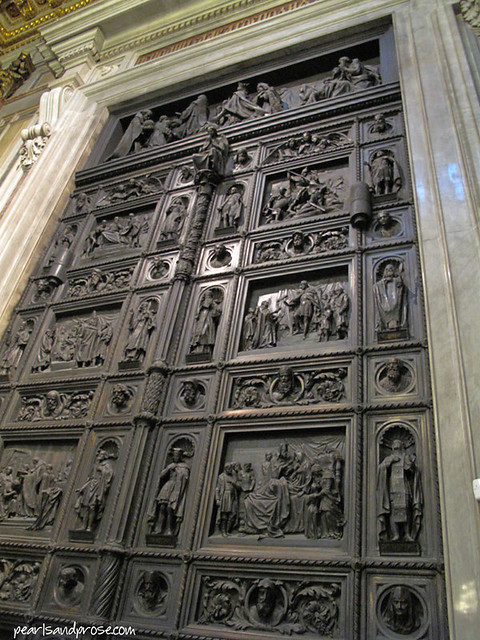 The cathedral’s bronze doors, covered in reliefs by Ivan Vitali, are patterned after the doors of the Battistero di San Giovanni in Florence. 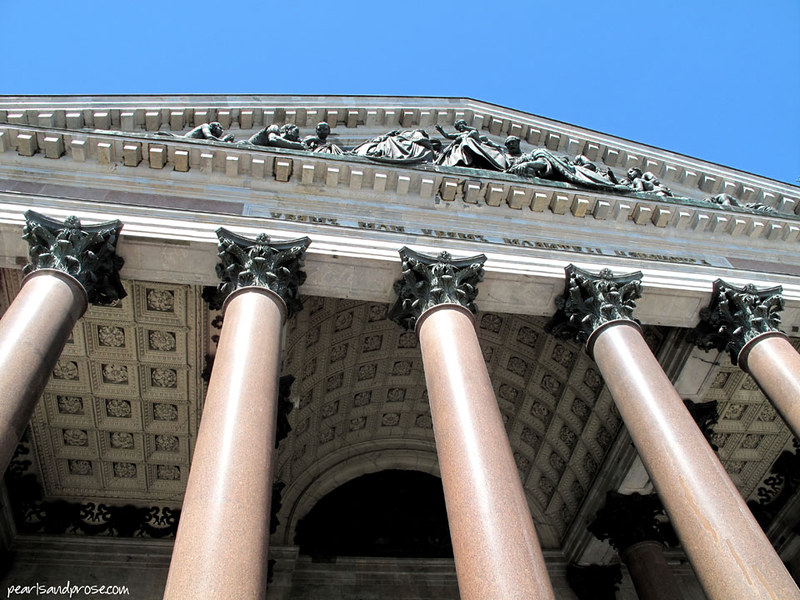 The exterior is faced with gray and pink stone, and features a total of 112 red granite columns (made of single pieces of red granite) 48 at ground level. It’s hard to tell from this photo, but those columns are massive.

I wasn’t that struck by the outside, but the interior was a different story. Amazing. It’s hard to take in how huge it is, and how much art is everywhere…. 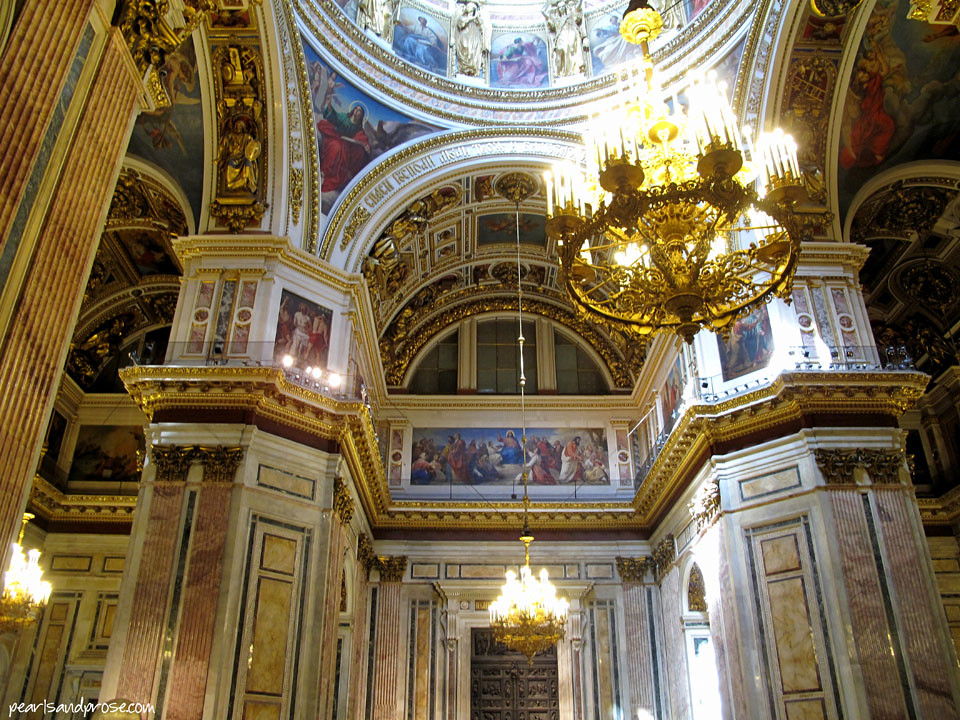 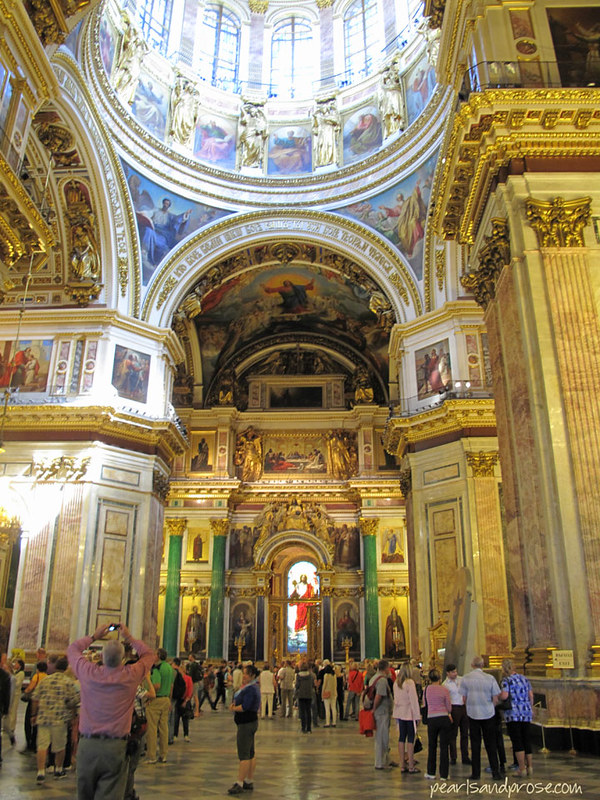 I hope this photo gives you an idea of the scale of the place. According to my guidebook, St. Isaac’s is considered “one of the world’s top architectural splendors of the 19th century.” 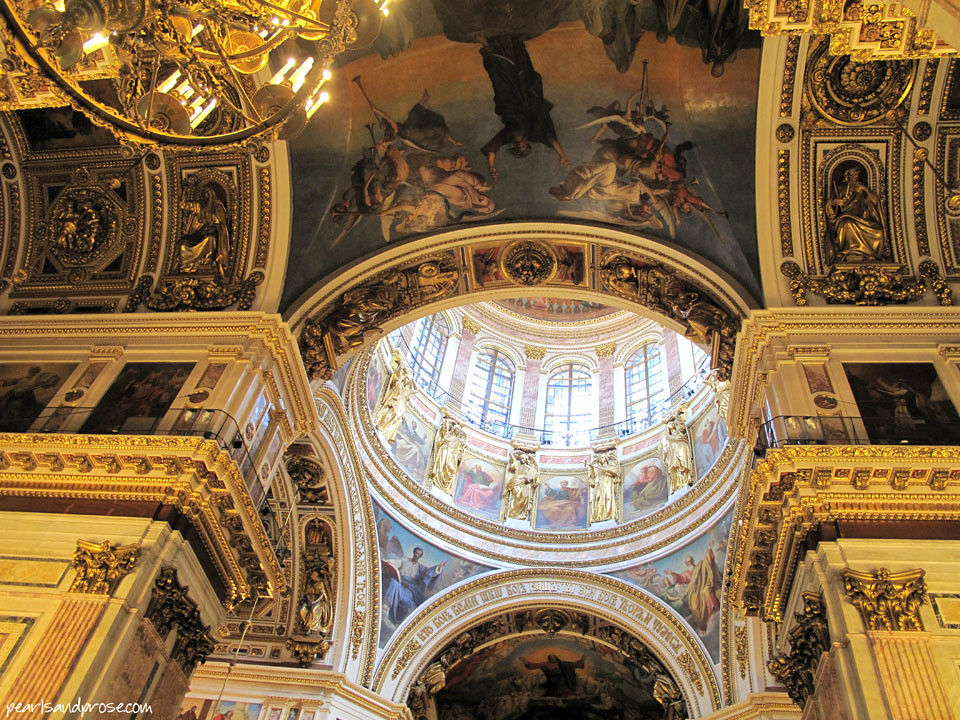 The cathedral took 40 years to construct, under the direction of French-born architect Auguste de Montferrand. It was completed in 1858. Over 400,000 workers labored on the cathedral and hundreds perished in the process. 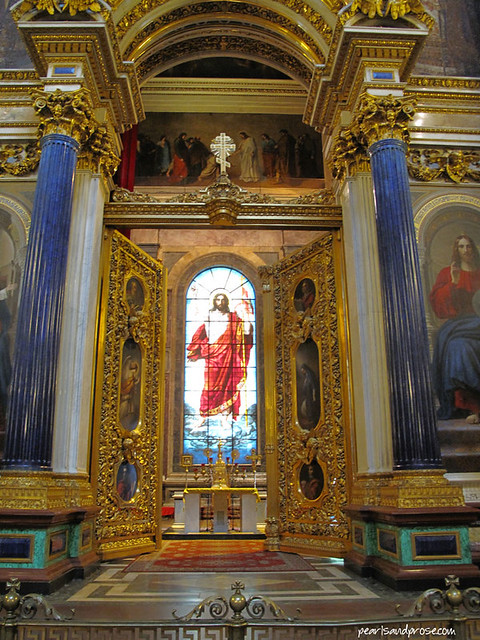 The rare occurrence of stained glass in an Orthodox church; it depicts Christ Resurrected.

In 1931, St. Isaac’s was turned into the Museum of the History of Religion and Atheism. Now services are held, but only in the left-hand side chapel. The main part of the cathedral is used for services on feast days only. 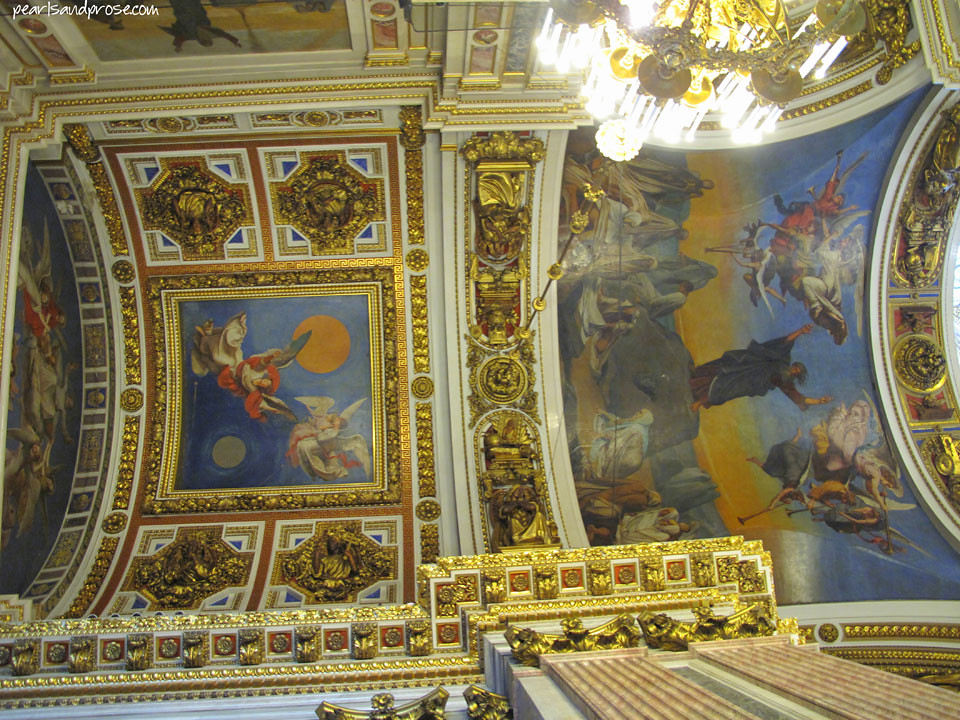 The interior was originally decorated with paintings by Russian masters. When the paintings began to deteriorate due to cold and damp inside the cathedral, Montferrand ordered them to be painstakingly reproduced as mosaics! Can you imagine getting that order? Yeesh. 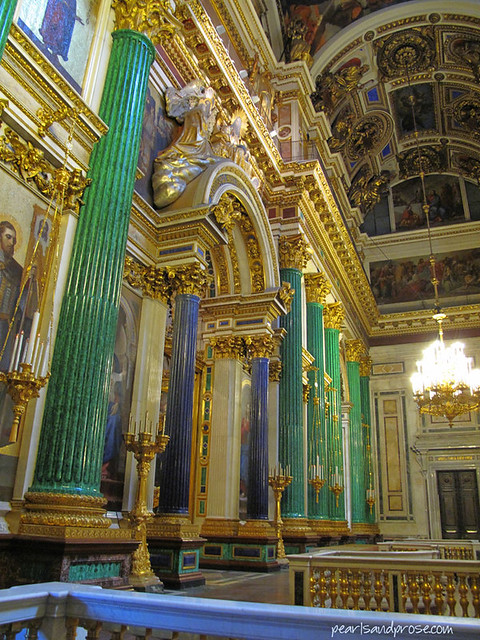 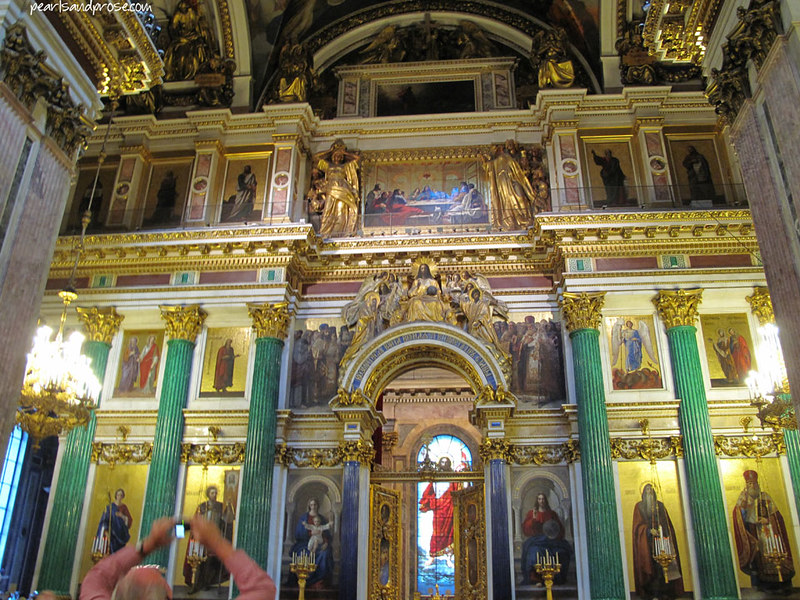 The iconostasis, a wall of icons and religious paintings separating the nave from the sanctuary, is framed by eight columns of semiprecious stone: six of malachite and two smaller ones of lazurite.
[Just could not get away from the photobomber in the pink shirt. Didn’t have time to wait him out, either–he took shot after shot after shot. :)] 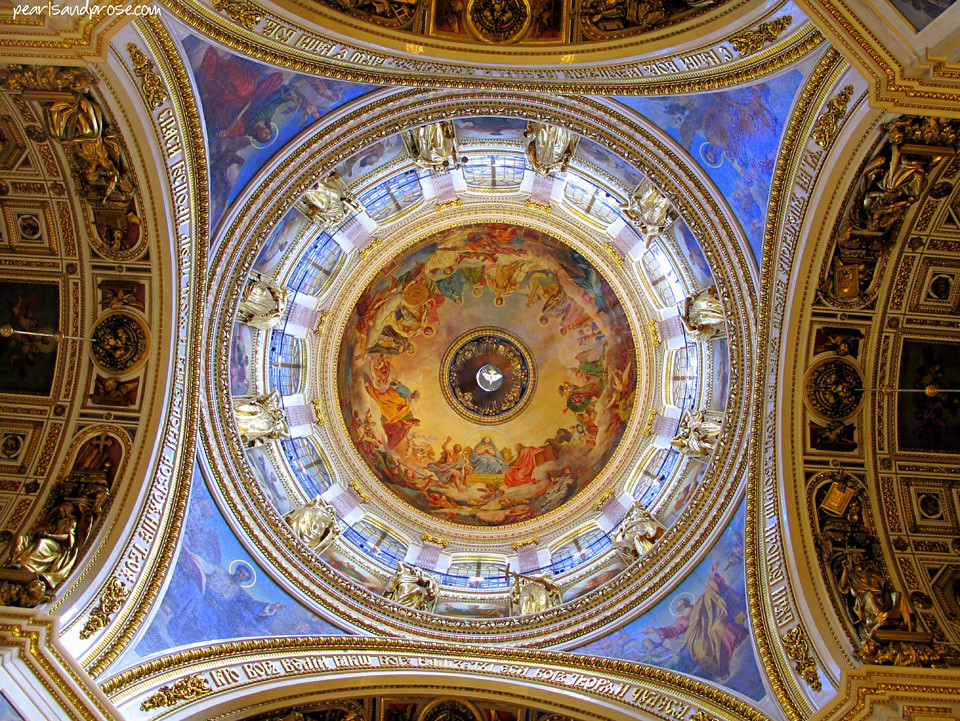 Loved the colors inside this dome. It is just over 262 feet (80 m.) tall. See the white dove in the very center? That bird has a wingspan of 5.4 feet (1.65 m.) and is made of silvered copper. It represents the Holy Spirit and is the focal point for Karl Bryullov’s 8611-square-foot (800 sq. m.) “The Virgin in Majesty.” I still can’t wrap my brain around the sheer size of the fresco.

There wasn’t nearly enough time to study all the details in the cathedral, but I’m so glad I got to see it. I consider St. Isaac’s a must if you visit St. Petersburg. And make sure the interior is included in your tour–we met people on the cruise who didn’t get to see it on theirs.

Photography. With a little life thrown in.
View all posts by pearlsandprose →
This entry was posted in photography and tagged iconostasis, Russia, St. Isaac's Cathedral, St. Petersburg. Bookmark the permalink.

10 Responses to The Wonder of St. Isaac’s