“The Greengage Summer” by Rumer Godden

Posted on July 3, 2010 by pearlsandprose 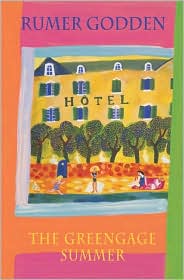 I read this novel a few months ago and loved it. I had heard of  the movie Black Narcissus, but not of the author herself. I found out about the book just this year from another blogger, Slim Paley, and now I seem to hear about it every month. It’s on a lot of “all-time favorite” lists, and now I know why.

The Greengage Summer is unlike anything I’ve ever read. It’s mainly a coming-of-age story, but has so many underlayers, and a sinister turn or two. Godden does such a good job of bringing the characters to life, they’re still with me. You truly feel like you’re seeing the world through their eyes.

There are five children, but the story focuses on thirteen year-old Cecil, the narrator; her older sister Joss,  and Willmouse, (yes!) the younger brother who loves Vogue magazine. The children are left in the care of hotel employees when their mother becomes seriously ill at the beginning of their vacation in France. Their interactions with said employees and a charming English guest are at the heart of the story.

I can’t say much more, or it will spoil the plot. Godden slowly takes you down the path the children are following, and you experience their awakening along with them. She is so skillful at understanding the way children think. Godden also understands the effects adults and children have on each other. Her descriptions of a sleepy summer in France are intensely vivid.

Incidentally, greengage is a type of plum! Who knew? I’ll let you guess why it’s a metaphor for the children.

I’ve read one other book by Godden: Battle of the Villa Fiorita. I can’t recommend it as heartily, because it’s guaranteed to break your heart. This book portrays the anguish children experience during a divorce better than any book I’ve read. And it was written back in the 50’s before people really discussed the subject.

I’ve just noticed a common thread in the two books. The mothers are incapacitated. One physically, one mentally. It will be interesting to see if that continues in other novels.

Godden had a pretty colorful life herself. Her parents were British, but she was born and raised in India. You can read her obit here.

I can’t end on that note, now can I? Here’s a little red, white and blue for you….

Everyone, have a safe and happy Fourth of July weekend!

Photography. With a little life thrown in.
View all posts by pearlsandprose →
This entry was posted in books, literature and tagged Battle of the Villa Fiorita, coming-of-age novel, France, Rumer Godden, The Greengage Summer. Bookmark the permalink.

2 Responses to “The Greengage Summer” by Rumer Godden